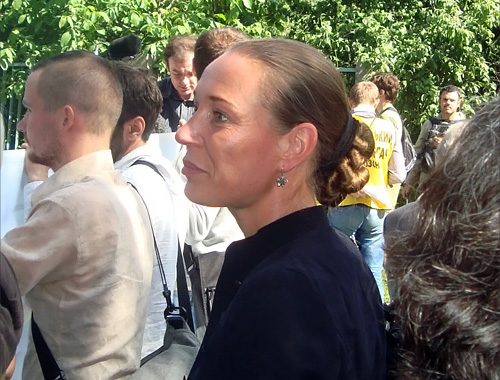 During the recent visit to the Netherlands the representatives of the APO "Gay-Alliance Ukraine" had several meetings with a member of the European Parliament, one of the vice-chairs of the Greens – European Free Alliance political group Marije Cornelissen.

Mrs. Cornelissen is a longtime friend of the Ukrainian LGBT-community. She has repeatedly supported carrying out of the Equality March in the capital within KyivPride and in 2013 personally participated in it. Mrs. Cornelissen has always been actively lobbying to the legislature of the European Union the issues related to the equality of Ukrainian homosexuals, and was the one who initiated the invitation of APO "Gay-Alliance Ukraine" members to Amsterdam – in order to become participants of the events dedicated to the Gay Pride week.

In 2012, when the Equality March in Kyiv was disrupted by right-wing conservatives, extremists and members of religious organizations, Marije Cornelissen expressed her indignation and put the question of infringement of LGBT rights in Ukraine bluntly reporting the situation to the UN High Commissioner for Human Rights. In a letter to the Verkhovna Rada of Ukraine, Cornelissen has strongly condemned tendency to adopt homophobic laws against freedom of expression of gays and lesbians. "I have heard that you will soon be debating the proposed laws that would prohibit expression of and information on homosexuality, – wrote MEP. – I want to ask you to reject these proposals, in the interest of human rights in Ukraine and of closer ties between EU and Ukraine". Mrs. Cornelissen has always underlined that, she is a great supporter of closer ties between Ukraine and the EU, expressing the hope that soon the citizens of Ukraine will be able to enter the territory of the European Union on terms of simplified visa scheme. However she insists that for this to happen it is necessary for Ukraine to observe human rights norms to the full extent. "The proposed laws if adopted will form an insurmountable obstacle to closer ties and visa liberalization. As you know, one of the requirements in the Action Plan for Visa Liberalization is the adoption of comprehensive anti-discrimination legislation, which includes the anti-discrimination rights of LGBT-persons (Lesbian, Gay, Bisexual, Transgender persons)", – was said in the letter, addressed to the deputies of the Ukrainian Parliament. After the Verkhovna Rada of Ukraine in the first reading adopted the bill on "propaganda of homosexuality", that provides among other things criminal penalties of imprisonment of five years, Mrs. Cornelissen addressed LGBT activists the words of support. In her letter to members of APO "Gay-Alliance Ukraine" MEP Cornelissen resented: "What a terrible news! I hoped that this bill will be put on hold for an indefinite period of time and I was really surprised that they voted for it so quickly. You have to remember the letter I sent to the members of Ukrainian Parliament in Spring containing the statement of the Dutch Minister for Foreign Affairs concerning the fact that this law contradicts the requirements of the liberalization of the visa regime between Ukraine and the EU. And this means that Ukraine won't be able to receive a visa-free regime, if the bill passes. I will do my best in order to have the similar statement from the European Commissioner for Enlargement and European Neighbourhood, Stefan F?le. In addition, we hope to bring it to the attention of other foreign ministers of the European countries". During her second visit in May 2013 Marije Cornelissen was able to take a part in the Equality March personally. This time the security of the March was provided by the police on the high level. Afterwards the MEP addressed the words of greeting to the activists and the people of Ukraine: " I would like to congratulate everyone who took part today in the Gay Pride in Kyiv with the success. The Pride was held and no one got hurt. And I would like to congratulate all Ukraine, because this day became a very important step on the way to strengthening ties with the European Union". On the 2nd of August 2013 gay-activists from Kyiv – Amsterdam guests – together with Marije Cornelissen took part in the massive musical and political action "Warriors for Love". They appeared on the stage in front of thousands of viewers. During this event Mrs. Cornelissen told the citizens of the Holland capital about the KyivPride, that, despite the strong opposition of religious clerics, politicians and right-wing activists, became the first in the history of Ukraine's successful LGBT Pride and an important statement in the fight for human rights for all the citizens of Ukraine.

Organizers of KyivPride on the Gay Pride 2013 in Amsterdam

Baltic Pride took place – despite all odds, or perhaps because of them?