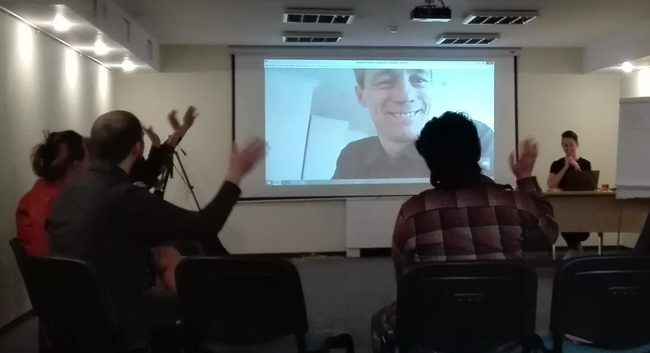 Director of programs of GLAAD Ross Murray conducted one part of the training for the spokesmen and spokeswomen of the LGBT community organized by GAU to enhance the expertise of the volunteers of the community. This training section was about LGBT community advocacy strategy and the role of media in it.

Ross Murray splits the media audience into three groups: allies of LGBT, opponents of LGBT and people, who have not yet taken a stand on LGBT. The spokesperson of the LGBT community should not be too enthusiastic to get the message across to the first two groups – allies are already committed and support the community; it is very difficult to convince the opponents of LGBT, which include leaders and members of radical groupings, as a rule. Murray advised the spokespersons to imagine the communication with some members of the family from the third group, i.e. a person without a final opinion about LGBT. For example, one should try to explain one’s position as it were to the grandmother.

Ross Murray believes, a spokesperson should avoid abstract statements about the rights and discrimination. It is better to say about the situation the members of the LGBT community are in and provide concrete examples. To achieve it a spokesperson should understand the audience, he or she addresses, to find a story, which can unite the spokesperson and the audience, and find points of contact. “I believe, people are less rational than we think they are; and that they are emotional. A personal story is an emotional tool, we can use”, says Murray.

The story would not necessarily be personal – the inclusiveness of the storyteller is necessary. He or she should know the person the story is about and know the specifics, since the story should include only the facts. Besides, the story should serve a clear objective with an eye to a further effect. “Take a personal story and make it universal”, advises Ross Murray. – “Finalizing the story, try to end it with a phrase being addressed to many people”. Let the listeners see injustice towards the LGBT, let the listeners put themselves in the place of the LGBT to understand the problems, which the LGBT face.”

Taking part in debates or TV programs with the opponents available, one should try not to repeat anti-LGBT rhetorics, because afterwards the audience remembers too many negative messages. However, anti-LGBT opinions should not be neglected. Everyone has the right to hold an opinion – one should not consider the own opinion to be the only true one. 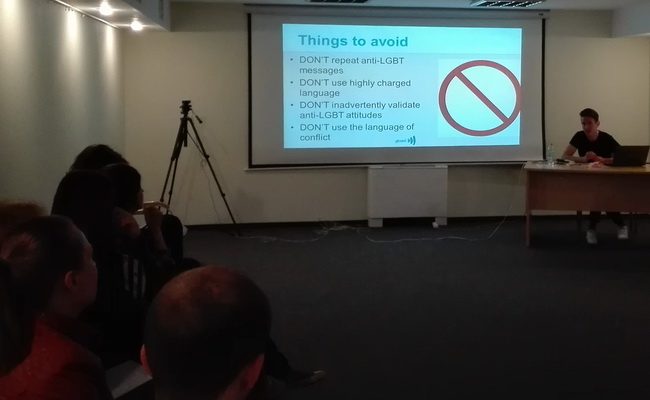 Talking to the journalists, Ross Murray advises to evaluate preliminary knowledge of the interlocutors, not to confront them with too much information and terminology, and to give it as much as the interlocutor is ready to absorb. Besides, one should remember, mass media is a communication tool with society, so it is important to express oneself the way the audience understands the spokesperson.

Read also: Ross Murray (GLAAD): Our main task is to create the world with people living their own life there

At the end of the training, Ross Murray highlighted, what had worked in the US and maybe could work in Ukraine. “Firstly, the collaboration of LGBT movement with other human rights, women’s initiatives of the minorities. Secondly, it is important to talk more about children and families. The researches done in the US proved there is no difference between the upbringing of children in heterosexual and homosexual families. The only negative effect is stigma and discrimination of children from a homosexual family by the society. The children of same-sex parents, however, know more about gender equality, tolerance, kindness, empathy, and there is less negativity coming from them.

Alekseyev still hopes to hold “gay parades” in Crimea; however, local authorities and devastation terrify him