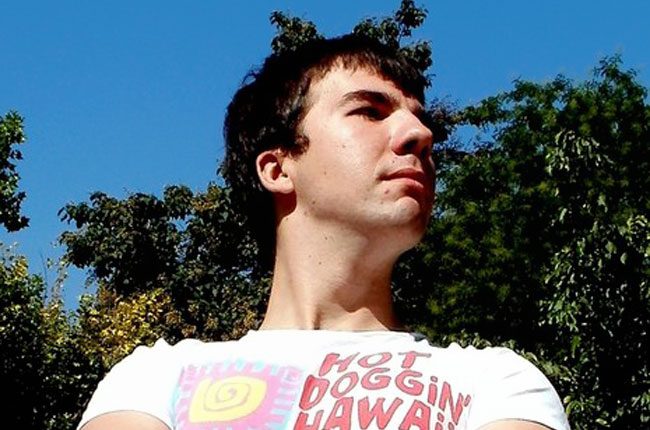 I realized that I was homosexual very early. In my childhood I understood that the female body was of no interest to me and didn’t excite me unlike the male one. But I had no information about homosexuality, despite my interest in science that also appeared early (after Jurassic Park movie I understood that I wanted to study DNA and be genetic scientist, so I indeed became Candidate of Science in biology studying DNA). The books, even those of popular science had no information. I saw only Moiseev (an excentric Russian open gay singer – translator’s note) and caricatures of gays so I didn’t make the connection with gays and homosexuality. How come, do I have something in common with those finicky scarecrows wearing make-up? I’m not like this. And my family could say only bad things about homosexuality, after all a Catholic family is a conservative one.

When I was first grade pupil I surprisingly hugged and kissed a boy despite all this background of homophobia multiplied by total lack of knowledge about homosexuality and gays being more like me and not those caricature clowns that I saw.

I remembered well when I was in second or third grade and my mother was taking me and my vis-à-vis from school and he asked me: “Maybe we should tell our moms?” I was scared. I understood that this was wrong, this was unacceptable so I didn’t have my first coming out at the age of 8, though I could. Afterwards I was transferred to another school – it was prestige school with advanced study of physics and mathematics.

It was the end for my happy childhood. Pupils of ordinary school that I had been studying in were comfortable with my homosexuality and I had friends but now everything changed dramatically. It was like getting into hell. There was not a sign of kindness and benevolence in the class, on the contrary, it had distinct hierarchical organization, close to troop of apes with alpha males. Everyone was very homophobic and xenophobic, any divergence from accepted standards was punished with mockery and contempt if not worse. You may imagine the air in the classroom if you recall Scarecrow movie with Kristina Orbakaite. 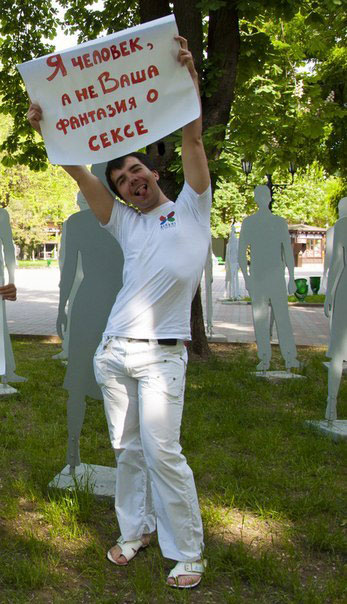 I am human and not your fantasy of sex

Next time I wanted to come out when I was studying biology in the university so I tried to prepare my mom. I started talking about homosexuality (I knew much more due to the Internet, I knew that homosexuality is normal and read Igor Kon). There was Ukraine Has Talents TV show and my mother supported travesty diva Ursula (Artem Semenov). I saw that she liked gay artists and gay singers a lot, so tried to talk to her. And her reaction shocked me: she was ready to accept any person’s homosexuality but when I tried to hint, as I was afraid to talk straight, she got very hostile to such talks. So it was the second time when I neglected my sexuality, my being grown-up, my desire to love, to kiss, to make out, to take walks together in the evening. Anyway, I couldn’t tell my mother, I had no gay friends and I didn’t even know how to meet them, as I was too afraid to sign up on the websites and nobody talked to me on the street.

So I plunged into science, used to stay in laboratory till 10 p.m. The science became my wife and lover. I got prizes on republican academic competitions, had enhanced student stipend and degree with honours, did postgraduate studies but all this brought me no joy. I had that load on my mind that seemed ready to crush me. I was spending all my life in the laboratory and actually it suited me. I didn’t understand that this was not a life but half-life, a parody.

When I was 23, a post-degree student joined our department. He and I were poles apart. He led a riotous life, used to come home in the morning, took too much for granted and did not care at all what his father said. Watching him I understood that I was jealous. I understood that my youth was coming to end, my adolescence had ended and I even didn’t kiss anyone! So I decided – enough.

I signed up some website (it was Mamba). There was no photo in my profile and it was very creepy to send it via e-mail. So I communicated with a man who also didn’t have a photo. He was not scared with the absence of picture in my profile and with that I had never been with a man. We met. He turned out to be really attractive, though he lied about his age, he was 35 instead of 27 years old. And I was very grateful that it all was very pleasant for me, he created really nice atmosphere, was utterly amiable and tender and I was on cloud nine with happiness. Maybe it helped me to accept myself, step by step. When I was 24, I was not afraid to show my photo in profile anymore. But my relationship with my mother got more complicated, there were more and more rows. I lied, telling her that I went to meet my friends or a girl, but it was getting worse.

Such life was unbearable, with its total control and nitpickings. When I was close to nervous exhaustion I decided to tell my mother everything and let her turn me out of the house, come what may. And I confessed to her during one of the scandals.

My mother amazed me once more – she stopped rowing, burst into tears and told that she knew everything. This nightmarish month was organized specially to make me stop lying. It was very unpleasant to her. She said that she loved me and accepted me the way I was, it just hurt her that I lied and did not trust her.

Afterwards my life changed completely – I was free. I came out to some colleagues at work and they also accepted it, our relations got better, I made friends. Friendship became actual for me after my coming out because it’s impossible to have friends if you’re pretending, playing some part instead of being who you were. Friendship is trust and frankness, impossible without coming out.

My life after coming out became much more pleasant and comfortable, I started enjoying it. My working stagnation was over, I wrote and defended my thesis. I can tell you something. I don’t urge everyone to come out – you have to grow to it, so to speak – ripen. I turned to be rather slow thinking, it took me 16 years. And you’d better not to come out if you live among the homophobes and it is dangerous for your life. It appeared that I lived among smart, clever and nice people who were OK with my homosexuality.

But this is what I want to say: I regret that I haven’t done it before. It is happiness – to be yourself, this is the taste of life and you cannot be yourself without coming out. You can’t really communicate without coming out. How can you have a heart-to-heart talk with somebody you lie to or talk round corners? Coming out is necessary for the society – for us to become visible, to have rights. Anonymous people scared of themselves cannot have rights. But first of all it’s you who need coming out because it is the stage of your evolving, it creates your integrity. If you don’t accept yourself, you can’t be whole.