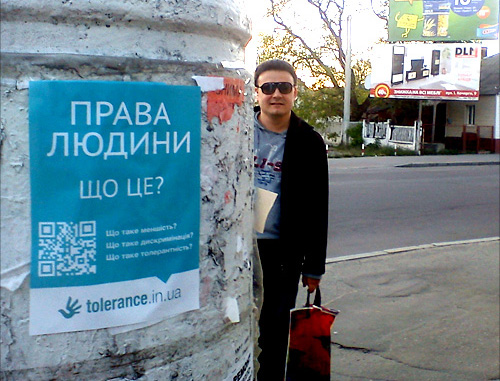 The inscription on the poster says: "Human rights. What is it? What is minorities? What is discrimination? What is tolerance? www.tolerance.in.ua"

Flyers and stickers about human rights – is a new phase of the public awareness campaign in Ukraine. These information materials are being distributed in four cities of our country – Odesa, Lviv, Zhytomyr and Kryvyi Rih – in the framework of the project "Promotion of basic human rights and freedoms and countering homophobia through increasing public awareness" under the support of the Embassy of the Netherlands in Ukraine.

Activists and volunteers of our organization are distributing flyers and placing several types of information stickers in the public areas of participating cities. Flyers reduplicate posters placed earlier on the city bigboards. On them people with covered faces draw attention of passers-by to how homophobia may prevent them from realization of the basic human rights. The second type – minimalistic posters in two languages, Russian and Ukrainian, which ask a question about what human rights are. The text placed below suggests to think about discrimination and tolerance. If people do not know the answers they can find it on our website tolerance.in.ua, which can be easily found and saved by using the QR-code. 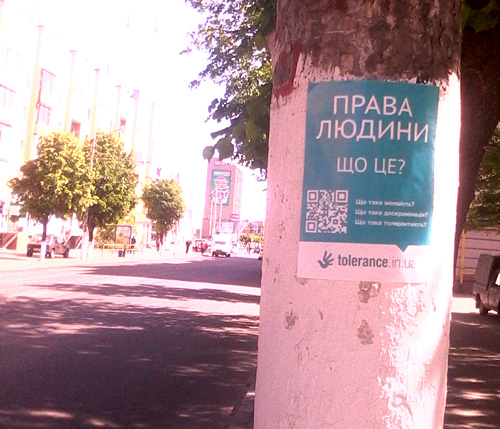 The inscription on the poster says: "Human rights. What is it? What is minorities? What is discrimination? What is tolerance? www.tolerance.in.ua"

This activity is an element of a comprehensive program to raise public awareness, with the main objective – to actualize the problem and set the stage for the future interventions. We believe that incomprehension of basic concepts of human rights, democracy and discrimination by Ukrainians is a barrier to the successful development of the society towards the civilized, democratic existence. The knowledge of human rights as the basis of civilized life will allow us to move towards European integration, not only in legal terms, but also at the level of life philosophy and perception of the world.

Where did homophobia in Ukraine come from?

What do Ukrainians know about the Human Rights? Variety of opinions on this matter presented in our new video