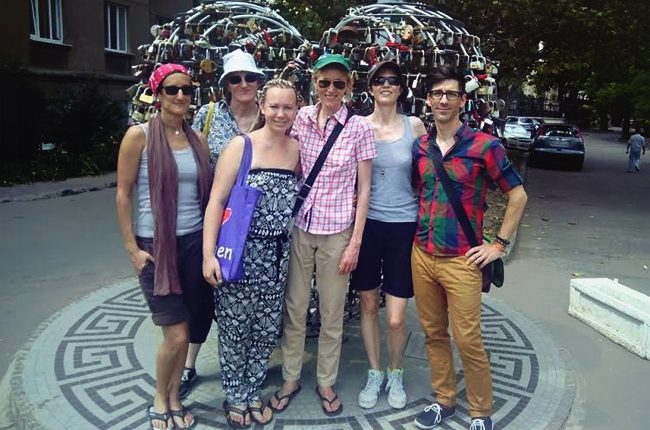 From July 31 until August 7 under the support of contact group Munich Kiev Queer and UPO "Gay Alliance Ukraine" extremely interesting and fruitful week of training and experience exchange was held in Odesa. Each day of it was filled with vivid events, new acquaintances and ideas for further cooperation.

On August 1, 2014 in the art club "Exit" ("Vyhid") opened an exhibition of Naomi Lawrence "Guys, let's live friendly!". We are very grateful to the club administration for their hospitality and support in organizing this event, because the music and art unite people regardless of any secondary factors.

The next day everyone willing were able to take part in two creative workshops, an art and music one. "All people are talented by nature, just not all of them are aware of it", – believes Naomi Lawrence, the author of newly opened exhibition.

The Munich artist became the teacher of master class "Positive protest", and girls from a music band  Sally Rides conducted a workshop "Musical Carousel", which was a kind of continuation of the rock camp, previously held in Munich in July this year. Two female activists from Odesa took part in it. Even those who do not possess the technique of playing any musical instruments were able to try it and receive basic skills to play the instrument they liked the most. After the end of master class Sally Rides performed to the audience once again, this time at the open stage of the "Rainbowclub" cafe.

The third day was marked by the implementation of creative protests: six mini actions were held, among them – a performance "Mr. P. and TV", a call to the need for waste processing, an inability for cycling in the city, pollution of the port waters in Odesa, a small amount and poor condition of parks, as well as the inequality of the law on marriage for homosexual and heterosexual couples in Ukraine. Additionally a positive cube smiley with good messages written with chalk on the pavement was "accidentally" forgotten at the Potemkin Stairs. It was a wonderful day!

After the fruitful work all the participants had an active leisure time, exploring the city and Odessa region. We had already told about how Ukrainian and German activists seized Akkerman fortress and learned about the excavations of the remains of the ancient Greek city of Tyre. The following day everyone went on a guided walking tour of the most beautiful places in Odesa, had a boat tour and a nice dinner tasting famous dishes of the Ukrainian cuisine.

The last day, as usual, was devoted summing up. Everyone participating in the Week activities could share experiences and discuss future plans. It was great that Munich Kiev Queer was not limited only to the twin cities of Kyiv and Munich, but also expanded the cooperation with other cities.

The organizers would like to thank everyone who helped to make this week unforgettable: participants of events and volunteers of the QueerHome centers, art club "Exit" ("Vyhid"), "Rainbowclub" cafe, community center "ManFuLs Odessa" and organization "Life+", as well as initiative group "Cycling club for LGBT in Odesa" for a wonderful joint experience and pleasant cooperation. Special thanks to the contact group Munich Kiev Queer for the support, experience, energy and inspiration that you generously shared with us. We really hope that such meetings will become a good annual tradition.

Iryna Bilyk and her Kaprizzz