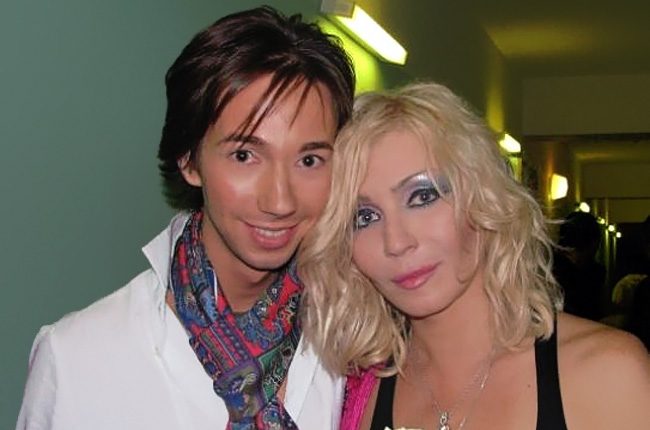 Iryna Bilyk and her Kaprizzz

Lately media publishes information under scandalous headlines that People's Artist of Ukraine Iryna Bilyk "requests the police to protect her from provoker's attacks threatening to disrupt her concerts". The fact that the provoker is being called "a transvestite who is not right in the head" also adds fuel to the fire. With regret we have to admit that the national pop icon in all likelihood took the lead from her PR-managers whose professional level leaves much to be desired.

Bilyk about Dita Kaprizzz – "Incredible truth about the stars"

Once it became known that the nationalists will try to disrupt a concert of Ani Lorak in Odesa as a response to the singer's flirting with the Russian show business fans of Iryna Bilyk also got information that the provokers of a nationalist persuasion were preparing a disruption of her show in the same city.

Iryna Bilyk's show was scheduled on July 19th at the Itaka night club. Representatives of the star's fan club were quick to warn her management about the possible disruption of the concert, and what is important – this fact was taken into consideration, and security of the concert stage was reinforced. As a result, the event was held without any excesses. Moreover, it was at the same concert when Iryna Bilyk for the first time publicly declared her attitude towards the situation in Ukraine and sang the national anthem.

On the eve of the concert one of the oldest and most loyal fans of the singer being solely well-intentioned posted a message of a possible provocation in a closed fan group of Bilyk in VKontakte. Mikhail Pavliuk from Lviv wanted to warn all the fans in Odesa that due to the situation they might not be allowed to the star's autograph session and asked them to be patient and understanding.

Unfortunately, exactly the same message was turned on its head by someone from Bilyk's surrounding – in all likelihood, by a person engaged in monitoring of social networks. In a few days Iryna performed in J?rmala festival "New Wave", having declared that "an inadequate fan from Lviv" supposedly "disrupts her concerts." Later the same messages appeared in the press and started to be spread over the Internet gathering more and more "scandalous details".

The situation was aggravated by the fact that Mikhail is a popular travesty artist performing under the stage name of Dita Kaprizzz. This gave Iryna Bilyk the reason to suspect he had mental disorder: "I don't want these people to come to my concerts. If in the evening he dresses and puts on make-up like Iryna Bilyk to become a woman, this means he is mentally ill. And in the daytime he writes threats online that he is going to do something to me", – stated Ukrainian gay icon.

Mikhail himself claims that there is no truth in Bilyk's words. Firstly, he made no attempt to disrupt the concert in Odesa. Pavliuk, who never left Lviv at that time, just wanted to notify other fans about possible provocations. Secondly, he is not "a drag queen" but an artist who, besides, never copied Iryna Bilyk on stage, creating his own stage image. And one more important note: the singer knows Pavkliuk very well since in the past Mikhail was one of her most beloved fans she spoke fondly of in her interviews. However now out of a simple warning in the social network has been created an information occasion inflated into the All-Ukrainian scandal.

On the request sent to PR manager of Iryna Bilyk, was received the following reply: "Mikhail shouldn't have posted information about provocation, thus aggravating the situation. And moreover, IN (Iryna Mykolaivna) is against him creating any pages about her or on her behalf.  Against him using her photo and image!" The request is more than strange since Mikhail Pavliuk haven't created any pages "on her behalf" and fan groups in social networks is quite a widespread phenomenon, which nobody has the right to forbid, moreover, it's usually flattering to any artist.

The inscription on the picture says: "Wanted Dead Or Alive. Dangerous criminal. Reward 50 000 $."

Mikhail Pavliuk genuinely outraged by the singer's attitude to an entire group of people for whom the gender issue is extremely important one. Mikhail himself doesn't belong to them underlining: "My stage transformation is solely creative and it is work for me". However, he is unpleasantly surprised by the singer's attitude toward such people and ascribing them "mental health problems". Especially in light of the fact that many of them are longstanding and genuine fans of the artist and for whom she has performed many times during her live shows in the night clubs, where they rest and spend their leisure time.

Pavliuk believes that he was libeled, demanding an apology from Iryna Bilyk and recalling of her recent lawsuits with the yellow press. However today the methods of her management, unfortunately, began to resemble the ways tabloids work.