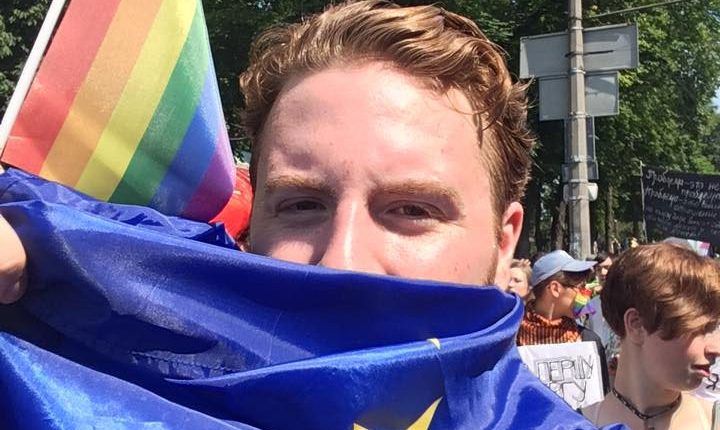 Kyiv Pride 2017 was for myself, as well as other local Ukrainians, the first time I had ever paraded in a pride march. Interning for Gay Alliance Ukraine this summer has without a doubt brought to my attention and emphasized to appreciate the fundamental rights and freedoms that I have taken for granted as a Canadian citizen, but more significantly, my time at Gay Alliance Ukraine gave me a much bigger determination and purpose to continue to fight for the struggle of human rights both for Ukraine and back in Canada. Fighting for human rights has and continues to be an uphill battle no matter where one might be, but it takes determination, collaboration, and solidarity that determines success or not. 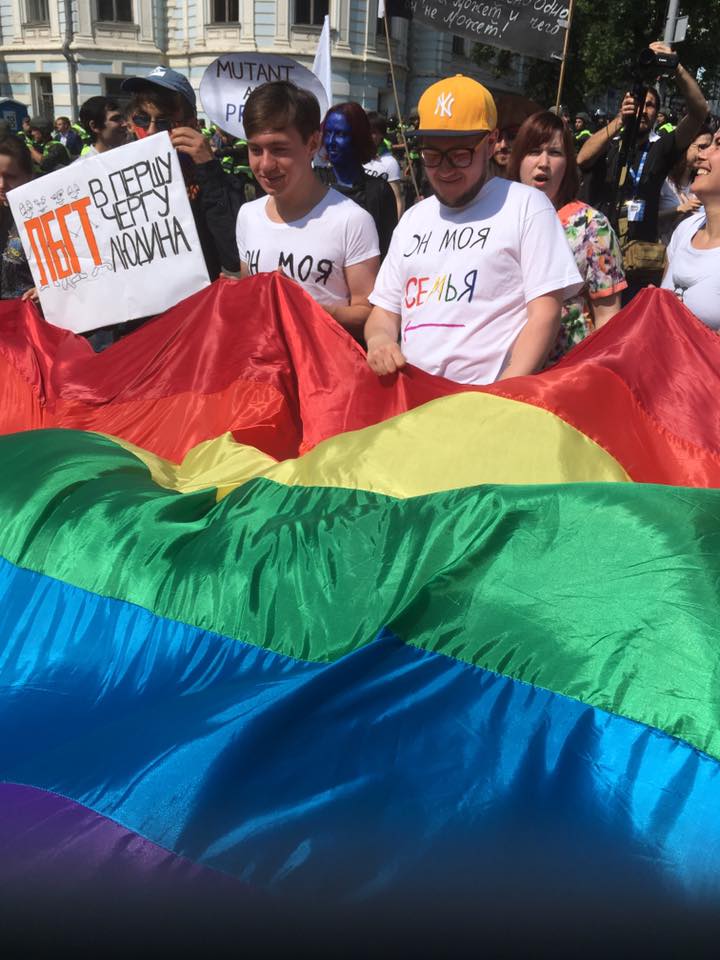 Parading through the streets of Kyiv, holding a rainbow flag with the European Union flag draped over my back, it emphasized to me that this was much more of a «march» — it is a continuation of a fight for a new Ukraine where everybody is welcome and is tolerated. Like Eurovision’s theme this year of «celebrate diversity» — this is the Ukrainian’s turn to celebrate their diversity. As these pride marches grow larger and attract more people from all over the country with different backgrounds, social and economic norms and the like, it is only natural and expected that Kyiv Pride will only grow and possibly expand to other cities in Ukraine. What is accurate about fighting for human rights (and LGBT rights) throughout history is that once the wheels of freedom start to turn, there is no going back. This is especially true of Ukraine post-Maidan. Now that Ukraine has finally begun to fully implement a pro-western and a pro-European Union policy, there is no going back.

What I can hope for the future of Kyiv Pride, as well as the LGBT movement in Ukraine is the hope that the movement will continue to grow and become stronger in fighting for putting pressure on the government to respect the rights of sexual minorities and gender expression. This is because it is the government’s responsibility to protect citizens against hate crimes and to entrench the freedoms of its citizens (unfortunately that the current government does not recognize LGBT hate crimes). As Canada and other Western countries struggled through the «sexual revolution» of the 1960s and 1970s that eventually lead to the normalization of LGBT persons and LGBT culture, my hopes are that Ukraine, and other post-Soviet countries that unfortunately could not experience this social revolution, that they quickly and effectively embrace social equality and diversity. While this does take time and even generations to accomplish, we are already seeing positive growth and positive news across the post-soviet sphere, from Georgia, Armenia, Ukraine, and the Baltic states becoming more and more tolerant towards the LGBT community even with the threat of right-wing activists. This is why the movements and the activities of human rights and LGBT NGOs and other grassroots pro-LGBT organizations are absolutely vital in beginning the first steps of equality. It is through the work of Gay Alliance Ukraine and other grassroots organizations in Ukraine that continuously push the social norms in the fight for LGBT rights and fighting government institutions to stick to their democratic duties to all citizens of Ukraine.

However, the drastic differences between Kyiv’s pride march and other LGBT marches in Canada cannot be ignored. It is no doubt that Pride marches in Canada (and many other countries) were once shrouded in violence and intimidation by the church and social conservatives. However, through the work of community organizations and pro-LGBT networks, these barriers slowly, but surely started to fall apart. It is from these stories and these historical transformations that leads me to believe that Ukraine’s LGBT history will definitely follow a similar story. Through learning the experiences of the first LGBT march in 2013, and the right-wing attacks on the LGBT community, especially the 2015 pride march towards hosting the successful march of 2016 and 2017 show that the optimistic development and evolution of the march of equality can become the celebration of diversity that it is in Canada.

In conclusion, the importance of this second free and safe pride march illustrates a much bigger picture of a sense of the development of LGBT equality and a constitutional freedom to peaceful assembly to demonstrate unapologetically of who you are. I only have hope and growing optimism for the future of LGBT rights in Ukraine — and I hope that you do too.