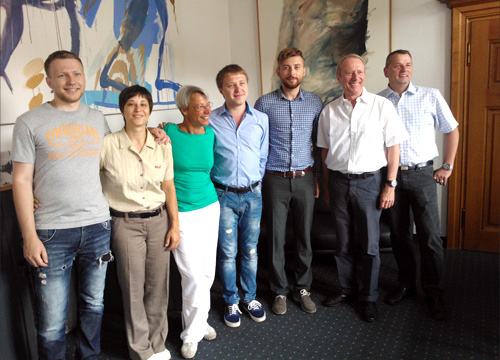 The Human Rights' activists Olena Semenova, Taras Karasiichuk, Stanislav Mishchenko and Voldoymyr Naumenko, all four working in the organization committee of KyivPride 2013, were welcomed in Hep Monatzeder's office. Monatzeder himself, in May, took part in Ukraine's ever first Gay Pride parade as member of an official Munich delegation visiting the Pride Week in its twin city Kyiv.

Semenova, Karasiichuk, Mishchenko and Naumenko visited Munich; as guests of Munich Pride ("CSD M?nchen") they get in touch with people from Munich's City Council and the LGBT-community in Munich to strengthen the cooperation that was established last year. As part of the existing partnership of the two cities, Munich's and Kyiv's LGBT-communities continuously exchange experience, information and expertise in order to support each other. The City Council of Munich backs this cooperation on an official political level.

Mayor Monatzeder mentioned once again how glad he was that in Kyiv, this year, Ukraine's first Pride could be held peacefully. "It was a first, but important step to rise up the topic of Human Rights for Lesbians, Gays, Bisexual and Transgender in Ukraine", he said. "It will be difficult to move backwards from now on." The four activists from Kyiv kept the Mayor updated about the recent evolutions in the country and told him, that, at least, the language of  Ukrainian politicians, and even of society, seemed to have changed a bit. "The topic is on the agenda now and media report quite friendly", said Olena Semenova, Press Officer of KyivPride 2013. On the other hand, hate attacks against LGBT-people were still a threat and the society remained widely homophobe. During their stay, Munich's LGBT-community signed a "Declaration of Cooperation" with its partners in Kyiv and Ukraine. They develop and implement common projects in the fields of culture, education and PR to improve the Human Rights' situation in both countries (www.MunichKievQueer.org). During Munich's Pride Week starting from 6th of July and ending on 14th of July, our guests from Kyiv took part in a debate about the results of KyivPride 2013, discussed on an international Women's Conference and presented, in Bavaria's Regional Parliament, the well-known exposition "K-People" with Lomo photographs from Stanislav Mishchenko showing portraits of Lesbians, Gays, Bisexuals and Transgender in Ukraine. Also, they participated in the Pride March itself fighting against Human Rights' violations against LGBT-people all over the world, especially in Russia and Ukraine.

The four guests gave their thanks to Mayor Hep Monatzeder and to both supportive City Councillors Lydia Dietrich (Green Party) and Thomas Niederb?hl (Pink Party) as the City of Munich supports Kyiv's LGBT-community on an official political level.

Lesbians, Gays, Bisexuals and Transgender face huge challenges in Ukraine: The Ukrainian society is mostly homophobe, still Parliament is due to discuss a law against so called gay propaganda. "LGBT people need the support of Munich", Taras Karasiichuk, Chairman of KyivPride says. "But this support is also important for the Ukrainian officials to make them understand that Lesbians, Gays, Bisexuals and Transgender aren't just random people, but a social group that needs to be protected."

Crime and punishment: an Olympic version

AIDS-Related Mortality goes down in Ukraine, although Hepatitis C rates goes up