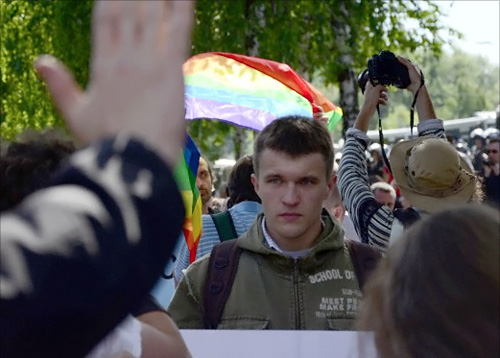 Starting from September 2013, the programme of UPO "GAY ALIANCE UKRAINE" on countering homophobia and xenophobia in Ukrainian society was expanded with two new projects. The first one is a large-scale public opinion survey on modern views and attitudes towards LGBT people in Ukraine. The second one is increasing visibility of the LGBT community and awareness of Ukrainian citizens of basic human rights and freedoms. The projects are being implemented in the framework of the Matra Rule of Law and Good Governance Programme (Matra RoL/GG) under the financial support of the Embassy of the Kingdom of the Netherlands and the Foundation for Democracy U.S. Embassy in Ukraine.

The project "Public Opinion Survey" will assist in developing better understanding of the situation with the LGBT people in Ukraine as well as help to define the best mechanisms to improve attitude of Ukrainians toward gays, lesbians, bisexuals and transgenders. For this purpose the opinion of Ukrainian citizens, their attitudes towards LGBT people and factors that cause discrimination will be studied. The project consists of quantitative sociological survey among general population of Ukraine, data analysis and development of recommendations for effective advocacy campaigns, aimed to achieve equality for LGBT people. The survey is being conducted in conjunction with the Centre of Social Expertise of the Institute of Sociology of NAS of Ukraine.

The project "Promotion of basic human rights and freedoms and countering homophobia through increasing public awareness" involves complex of measures aimed at strengthening the visibility of LGBT people in the media space and increasing the general public awareness of Ukrainian citizens on the basic principles of democracy and human rights. Within the project it is planned to educate and train 15 leaders – future activists of human rights movement, – from the four pilot regions: Donetsk, Dnipropetrovsk, Lviv and Odesa oblast. European experts will conduct a training course to teach them on human rights protection and afterwards, with the other regional activists, they will develop a plan on effective communication with the general public. The complex of communication activities will consist of the preparation and publication of articles in the media, conduction of round tables and press clubs, participation in TV programs and other forms of positive media presence. Organizers of the project expect that these measures will help to raise the level of respect of Ukrainians towards the basic human rights and freedoms, which will contribute to countering homophobia in Ukrainian society.