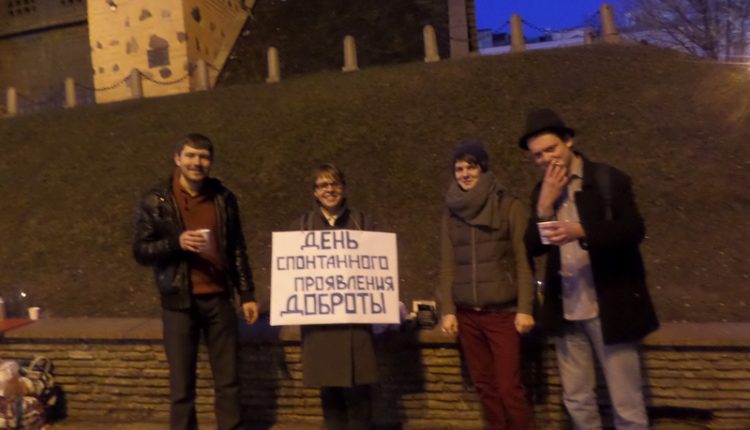 Day of Kindness: Queer Home activists handed out tokens for underground and treated passers-by to coffee

On February 17, the Random Acts of Kindness Day, the activists of Queer Home Kyiv organized some events sharing positive and good spirits with Kyiv people.

They started with a “kind” coffee machine that gives coffee for free. To do this, the activists filled it with coins from Queer Home coin jar but the first person coming for coffee was obstinate making the machine take his money. It appears that it is not so easy to make free coffee surprise for people as they are not used to get freebies from robots.

The second part took place by Zoloti Vorota subway station where the activists treated people to tea, cookies and candies. “People noticed us, they smiled, took photos on smartphones but not many of them chose to have a hot drink,” the activists tell. Those who came closer expressed their support and shared their positive emotions and impressions.

The event ended with handing out free tokens for underground. Older people tried to make sure that the tokens are not spoiled, underground personnel and police clarified what was happening and, which was the most important – why. But young people were glad with this event and took them gladly.

“Despite people mistrusting kind and free of charge intentions first, the event was a real success and pleasure. It is so cool to do good waiting for nothing in return!” tells Queer Home coordinator Kseniia.

Hot lines counselors were told of range of SOGI problems