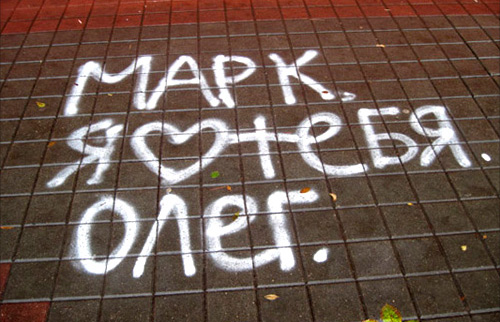 In September-November 2013 UPO "Gay Alliance Ukraine" jointly with the Centre for Social Expertise of the Sociology Institute under the National Academy of Sciences of Ukraine conducted Public Opinion Survey to determine the perception of LGBT people in society, as well as ways of its improvement. The research was actively supported by Democracy Commission, the U.S. Embassy in Ukraine.

Eight regions of Ukraine were selected for the research: South (Odesa oblast), West (Lviv oblast), East (Donetsk oblast), Center (Cherkasy oblast), North (Chernihiv oblast), and AR Crimea and the cities of Kyiv and Sevastopol as separate administrative-territorial units. In each of these regions hundred people were interviewed. In all regions except Kyiv the survey was conducted both among urban and rural populations in equal proportions. Analysis based on this sampling allowed to gain an understanding of the data at the level of each region.

Research findings showed that the majority of Ukrainians perceive homosexuality as something negative. 36 percent of them thought it was "an illness or result of psychological trauma". Almost the same percentage of respondents, 34 percent, believed that  it was "promiscuity, bad habit ". And only a fifth of the respondents agreed that homosexuality was a sexual orientation, with its "right to existence".

Understanding of the homosexuality by Ukrainians can be illustrated by the following table:

The questionnaire also contained a question about attitudes of Ukrainians toward the possibility of marriage between people of the same sex. Data analysis showed that 62 percent of the respondents believed that homosexual people by no means should be provided with such a right. 17 percent thought there might be exceptions, with each case individually. Similar situation was observed regarding the possibility of same-sex couples to raise children: 68 percent were strongly against it, 13 percent believed there might be some exceptions. Same-sex marriages were supported by only 9 percent of respondents, and raising children in homosexual families – 7 percent.It is worth noting that respondents with lower levels of education showed extremely high level of prejudgments against LGBT people. On the contrary, people high levels of education were more tolerant that had been more than once confirmed with results obtained by other similar researches.

Of all interviewed people, only 8 percent said that there were homo-and bisexual people among their acquaintances. Most of them – young people under 30 years. As should have been expected, the level of homophobia among Ukrainian citizens who had open LGBT community representatives in their social networks was slightly lower.

Materials of the research show that as of today Ukrainian people are not ready to accept members of the LGBT community as equal and full-fledged representatives of society.

Research Findings Report: "Public Opinion Survey to determine the perception of LGBT people in society and ways of its improvement" in Ukrainian you may find in the Library on our portal.

Euro-pragmatism by Azarov, or what is actually said in the Association Agreement with the EU