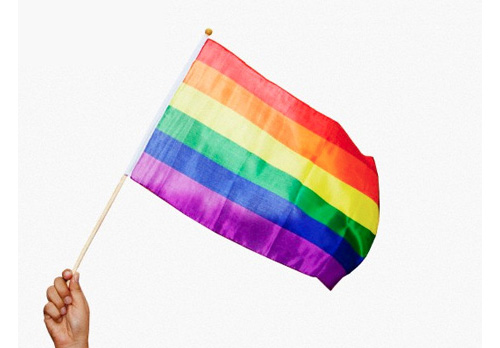 Recently in various Internet sources started to appear  another fake news of "gay parade", which supposedly to be held in Kyiv on May 25.

There are a huge number of information events these very difficult for Ukraine days. Nevertheless unverified "news" about the upcoming "gay parades" still appears regularly. The latest example is especially cynical as it is nothing but the repost of the news of 2013 – back then the Forum Festival KyivPride indeed was held in May, and namely on May 25th the Equality March was conducted.

The literal reprint of this message in 2014 appeared for a definite reason since on May 25th this year the Presidential Elections is to be held and based on its results the future fate of Ukraine largely depends on. Thus, the unknown individuals or organizations are trying to picture LGBT and human rights movement activists as provocateurs ready to do anything to reach their incomprehensible goals. 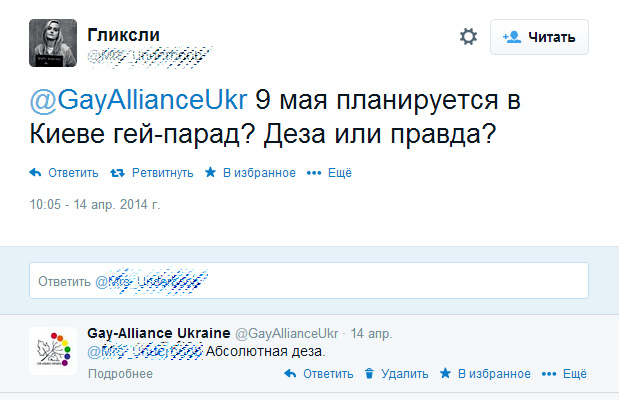 On one side, it cheers that, judging by such campaigns, existence of homosexual people is considered to be the only problem in Europe. On the other side, any destabilization of the society today plays into the hands of Ukrainian enemies. Not so long ago our readers wondered  whether it is true that "gay parade" in Kyiv is planned for 9th of May – it is supposedly spreading via social networks. Also "news" that "the international gay parade will be first time held in Zakarpattya" appeared in the Internet. Website KarpatInfo publishing this information referred to the source, in their opinion, worthy of the absolute trust: "According to one of the readers of internet media "Zakarpattya News". 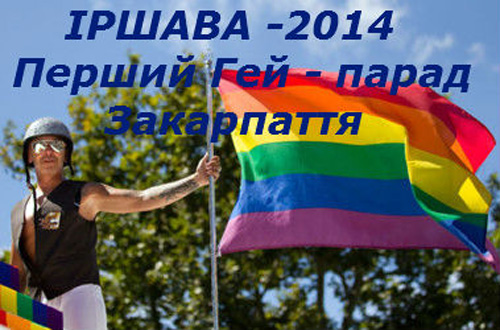 The inscription on the picture: "Irshava-2014. The first Gay parade in Zakarpattya"

We officially announce that there will be no similar activities neither in Kyiv, nor in any other cities in Ukraine until the Presidential Elections process is over. UPO "Gay Alliance Ukraine" calls upon journalists to verify the information before publishing призывает and citizens of Ukraine – to stop being afraid of gays since each representative of the LGBT community is someone's brother, co-worker, neighbor or daughter.  These are the people you know for years and they are most probably just scared to tell you about their identity. We hope this situation will change soon.