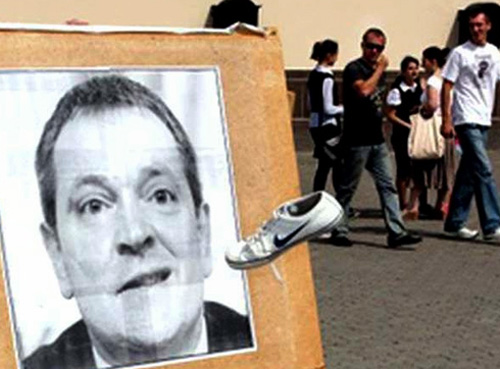 The Draft Law No.1155 by Vadym Kolesnichenko, the ex-MP of Verkhovna Rada, entitled "On the Prohibition of Propaganda of Homosexuality Aimed at Children" was removed from consideration. It is said on the official website of the Ukrainian Parliament.

In the explanatory note to the Draft Law, submitted on December 27, 2012 to the Verkhovna Rada of Ukraine, was worded as follows (original author's stylistic preserved – remark by GAU): "Ukrainian civilization, which had been formed for thousands of years, has its won culture, traditions, mentality. A family has always been the fundamental principle of the Ukrainian society. <…> However, over times, with the open boundaries, wide access to information from abroad, activities of the certain foreign structures on the territory of our country, which are implant to the Ukrainian public ideology uncharacteristic for its consciousness, it let to propaganda of a number of negative phenomena that destroy our nation morally and spiritually. At the moment one of such negative expressions of the liberalization processes in Ukraine is the spread of same-sex sexual relationships, its open propaganda in all the areas of public life under the guise of fighting for the human right to freely choose their sexual orientation".

Later, much was said of "the psyche of the child under the age of 18", which "should be formed on the basis of traditional views of family and relationships, based on the union of man and woman". And also were given frankly pseudoscientific data that "statistics suggest that among all the children born on the planet, is only 1% born of such babies, with congenital infringements on the hormone level, which eventually lead to subsequently development of homosexuality" (original author's stylistic preserved – remark by GAU).

In the final clauses was noted that specifically directed at child "propaganda of same-sex sexual relationships that can negatively influence on physical and psychological health, moral and spiritual growth of a child", is a subject to fines for private persons in the amount of up to one hundred nontaxable minimum incomes and is a subject to fines for legal bodies in the amount of up to five hundred nontaxable minimum incomes. If "intentional acts" on propaganda of homosexuality would be recommitted during a year, it might lead to imprisonment for a term of from three up to five years.

Let us recall that during the negotiations on the Visa Regime Liberalization with the EU the current Ukrainian government offered to the European Commission a compromise to which it agreed: the first stage of the Liberalization will be signed without the adoption of a comprehensive anti-discrimination legislation, including those based on sexual orientation. This issue will be raised again during the discussion of the following second phase. In exchange the Government of Ukraine offered the implementation of a series of measures, such as elimination of the homophobic draft laws remaining for consideration in Verkhovna Rada of Ukraine. At least in relation to the Kolsnichenko’s draft law the promise was fulfilled.

Mr. Kolesnichenko himself is no longer the MP of Verkhovna Rada of Ukraine; he was deprived of his position after his own petition and stated that he intended to take Russian citizenship and "breed goats".