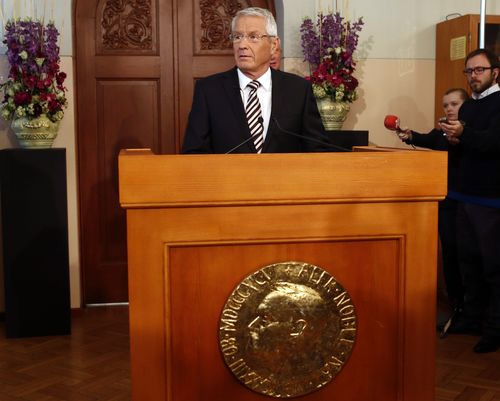 Kudos to the Nobel peace prize winner, but it’s another snub for LGBT activist

First of all, congratulations to the Organization for the Prohibition of Chemical Weapons (OPCW), which has just won the 2013 Nobel Peace Prize. Only a curmudgeon of the highest order would begrudge giving this honor to an organization devoted to eliminating chemical weapons, most currently in Syria.

Still, I have a bone to pick with the Nobel selection committee – namely that they don't appear to have considered the work of even a single LGBT activist or organization during a year when dozens could have qualified from Eastern Europe alone. For goodness sakes, bookies were posting odds for Russian President Vladimir Putin for allegedly helping to bring "peace" to Syria, despite his role as one of the key architects of the trifecta of recent laws that criminalize virtually every aspect of being or seeming to be LGBT in Russia.

It's a crass attempt straight from the Nazi playbook to divert public attention from his administration's corruption, including its suppression of dissent, its routine killing of journalists and whistleblowers, and the country's economic downspin. Yet Putin made it into the bookies' calculation. The same can't be said for any of the dozens of men and women in the mold of former Nobel winners Nelson Mandela and Burmese opposition leader Aung San Suu Kyi, who are now risking their lives to end the brutal suppression of LGBT people and ensure our full human rights.

This isn't rhetoric. As Taras Karasiichuk, president of the Ukraine Gay Alliance reminded me (through a helpful translator):

"Becoming an LGBT activist in Ukraine and everywhere in post-Soviet Europe means becoming part of a highly stigmatized group and losing any chances of a 'normal' life. It makes you utterly unemployable and puts you in danger every day of your life".

He should know. Ukraine, the first post-Soviet country to decriminalize homosexuality following independence from the Soviet Union in 1991, is experiencing a fresh wave of violence in the wake of Russia's witch hunt. Karasiichuk himself suffered from a concussion and had to have his jaw wired shut after being brutally attacked in the summer of 2012. So he's speaking from experience when he says, "The odds of your ending up in a hospital or become permanently handicapped are high."

Being an LGBT activist in Russia, which is so eager to present itself as part of the first world in every other way, cost Alexei Davydov, the first activist to be arrested under the new so-called "propaganda" law, his life. His death late last month at the age of 36 was hastened by having his arm so badly broken by Russian police in 2011 at a small protest defending freedom of assembly for all Russian that he spent a month in the hospital. As Julia Ioffe of the New Republic reports, "Davydov, a diabetic who was on dialysis, contracted an infection which led to kidney failure, his friends say. By the end, his health was so frail that, on a recent visit to Voronezh to protest gay discrimination there, a bout of food poisoning sent him into his first coma."

Russian LGBT activists themselves were quick to say that they had not yet done enough to end human rights violations and to recommend others for the Nobel Peace Prize. Journalist Masha Gessen, the target of the Kremlin's recent efforts to strip children from LGBT parents, thought the prize should go to the founders of Breaking the Silence for their work in Israel and Palestine. Nina Long, co-president of RUSA LGBT, recommended human rights activist Ludmila Alekseeva and Pussy Riot, whose members have been sent to remote Russian prison camps to die for speaking out against Putin's repressive regime. Yelena Goltsman, Long's co-president and the founder of RUSA LGBT supported a prize that would recognize David Kato of Uganda, who was murdered for working to end homophobia in his country.

And clearly the Nobel committee, in deciding to give the award to an organization or institution for the second year in a row, is eager to avoid the embarrassing episodes that have arisen in recent years when it has given the peace prize to individuals who have proven to be a tad less peaceful than one might have hoped.

The 2009 recipient, Barack Obama went on to celebrate his accolade by launching missiles against Libya without congressional approval. That was mere months after WikiLeaks' release of the US embassy cables, which revealed his administration routinely putting its thumbs on the scales of justice in other countries as a means of preventing its own henchmen, as well as the legal team that penned former President George W Bush's torture memos from being prosecuted for war crimes committed in the name of post-911 "national security". The 2011 winner, Liberian president Ellen Johnson Sirleaf notoriously defended her country's criminalization of homosexuality just half a year after her prize in a now infamous video interview alongside a squirming Tony Blair.

Still, I hope that next year's Nobel peace prize committee will lose its fear of naming individuals. And that the day will come when it recognizes LGBT rights as human rights. This may prove to be no small feat for an organization that has somehow managed never to recognize a single openly LGBT person in the 100-plus years of its existence (at least that we know).

To continue to ignore the role that homophobia plays in creating international violence and unrest for too much longer is unconscionable. And an organization that missed its chance to honor Gandhi, Vaclav Havel and Ken Saro-Wiwa should be eager to avoid that kind of mistake when it comes to recognizing this most recent wave of transformative activists.

Photo: The chairman of the Nobel committee, Thorbjorn Jagland, announces, the peace prize winner in Oslo.

Party of Regions deputy stands on guard of the Orthodox morality and intends to revive the nearly buried bill No. 8711