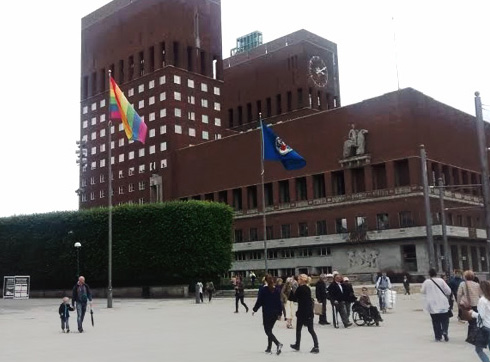 The rainbow flag waving above City Hall while in its session hall was held the LGBT Conference. Fiction? Not at all. It is the reality of the modern Oslo.

On June 20 in the capital of the Kingdom of Norway started a week of EuroPride, which's gaining momentum every day. The EuroPride Parade's on Saturday 28th of June 2014 on the main streets of the city. Representatives of UPO "Gay Alliance Ukraine" went to Oslo to take part in the International Human Rights Conference "Human Rights – From Vision to Action", which is being held under the EuroPride activities.

The Conference gathered representatives of various non-governmental organizations from Europe, as well as delegates of municipalities of the largest cities of the continent – London, Barcelona, Lisbon, Budapest, Vilnius… The main objective of the Conference is to actualize difficulties in the human rights observance that occur today even in very high developed countries. In addition – to share the best practices and best projects experience.

Unfortunately, a statement that requires no proof – that the LGBT rights are human rights – is still not obvious for many politicians. Needless to say about the general population regarding this issue. That is why such events are still very much needed.

The Conference was opened by the Mayor of Oslo, Mr. Fabian Stang. It is noteworthy that Mr. Stang is a member of the Conservative Party of Norway. Reports presented on the first day covered different aspects of LGBT activities in Europe. We were especially inspired by the information that city councils take responsibility not only for the most of the funding for gay organizations, but also for their direct activities. For example, Barcelona: they work according to "the main" directions – and yet not afraid of problematic areas and yet not afraid of problematic areas. One of the priority activities for organizations in Barcelona became the help for transgender women – from many different perspectives the most vulnerable group. And Oslo itself, where the municipal authorities take care of the well being of every inhabitant of the city and therefore implement awareness-raising activities on violence prevention against members of the queer community. In particular, work in schools where all of it starts.

The second day of the Conference was dedicated to issues of the most thorough developments in the sphere of services for LGBTI. Oslo authorities told about preparing the action plan to address the problems of the community, including – about the standards to provide equal public services. Representatives of different cities and NGOs, as well as local delegates exchanged their opinions and innovative experience. During the panel discussion Ukraine was represented by Olena Shevchenko, the leader of NGO "Insight" and Co-Chair of the Organizing Committee of KyivPride2014. Olena spoke of work successfully done and being done by her organization under the conditions of invisibility and ignore from the state.

However, EuroPride – is not only serious work, but also some fun. Hopefully, the variability of the marine weather will not spoil the upcoming holiday.