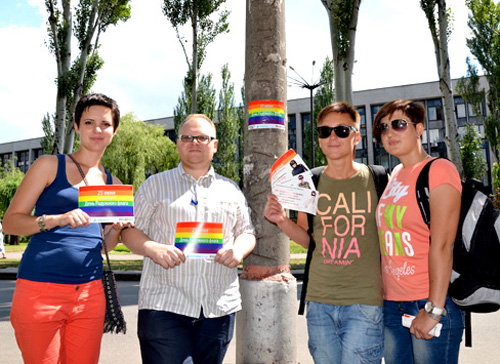 Employees and volunteers of Queer Home in Kryvyi Rih together with the MSM-group FRIENDS celebrated the International Rainbow Flag Day in their city.

The 25 of June is the date remarkable day for the entire queer movement. On this day in 1978 at Pride in San Francisco for the first time appeared a symbol, which is bringing together the representatives of the LGBT community all over the world.

The rainbow flag was created by Gilbert Baker, who responded to the call of activists and created a bright symbol embodying consolidation of the community.  "When I thought of creating a flag for the gay movement there was no other international symbol for us than the pink triangle, which the Nazis used to identify homosexuals in concentration camps. Even though the pink triangle was and still is a powerful symbol, it was very much forced upon us". In order to celebrate this day our activists pasted rainbow stickers all over their city. Moreover, they continued to inform citizens of Kryvyi Rih about the problem of homophobia in Ukraine and human rights within the information campaign "Promotion of basic human rights and freedoms and countering homophobia through increasing public awareness". Officially the project is over, but the work does not stop.