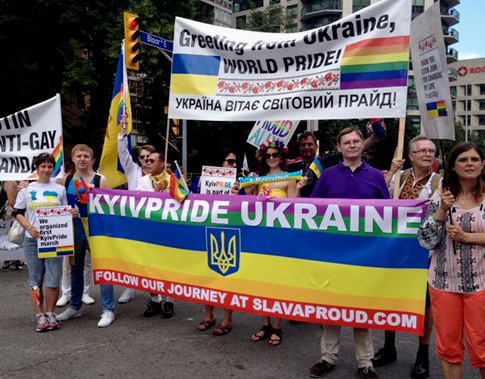 The end of June is a hot time for LGBT movement: the largest Prides of the world are being held. Selection of dates is not random, since it is exactly in these days, starting from the 28th of June 1969, in the New York bar "Stonewall Inn" started the story of an active struggle of the queer community for their rights, which continued into the pride movement.

This year KyivPride is also close to this date. In the meantime since the capital Pride Week has not started yet, Ukrainian activists took part in the various events together with their partners.

At the WorldPride that this year took place in Toronto, Ukraine was represented by Taras Karasiichuk, Maxim Kasyanchuk, Olena Semenova and Svyatoslav Sheremet. The activists participated not only in the pride march, but also held a number of meetings with representatives of promising governmental and public organizations. Olena and Svyatoslav spoke on the Canada national TV and told about the situation in Ukraine with the state of affairs with LLGBT rights, which is far from satisfactory. One of the primary tasks of the trip was to enlist the support of partners and get the attention to the events in our country. Since the success of the Pride week, which started yesterday, and the Equality March depends not only from thought-out organization, but also from the successful cooperation with partners.

Not so big, but still very soulful EuroPride, which took place in the Norwegian capital, was also presented with Ukrainian flags. Olena Shevchenko and Timur Lysenko joined an international group of activists that opened the March column carrying a huge rainbow flag. The final destination point of their column route was the Pride-village in front of the building of Oslo City Hall, where the fun continued all day long.

Ukraine also did not go unnoticed at one of the most famous world prides – in New York. We are thankful for that to our partners from RUSA LGBT, whose participants brought along flags and messages in support of our country.

Any Pride is an opportunity to feel freedom. Here I am – live, breathe, having fun and am not afraid to be myself. Big world prides – are the holidays, carnivals, music and dancing festivals. However pride movement started as strictly human rights movement. From that point we've begun the countdown hoping that soon Ukraine would become a place where everyone could use their fundamental rights and freedoms.

Inscription on the picture says: "There is no equality until there is equality in Ukraine".