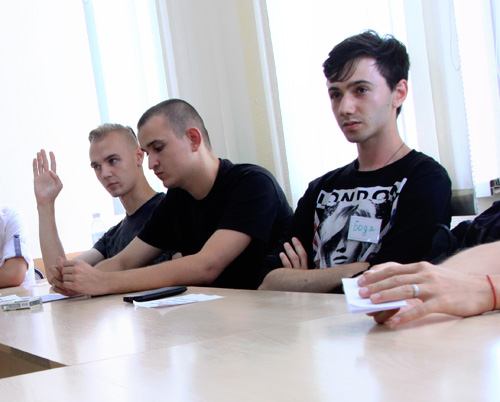 On July 2 within Forum Festival KyivPride2014 was held a pre-conference for young LGBT activists "New generation".

Twenty participants from all parts of Ukraine gathered together in the historic center of Kyiv – on Podil. In the selection of guests the organizers tried to ensure maximum diversity – to the event were invited not only gay people, who are traditionally considered to be the most active part of the LGBT community, but also lesbians, bisexual and transgender people. What is more, the priority was given to activists who have not earlier been involved in the national and regional LGBT events.

At the pre-conference young people had an opportunity to receive new information and communicate with the acknowledged leaders of the LGBT movement in Ukraine. The programme implied four workshops, followed one after another.

Maksym Kasyanchuk, head of the center Donbas-SocProject, told about the history of LGBT movement in Ukraine and answered the questions. Svyatoslav Sheremet, head of Gay-Forum of Ukraine, helped the participants to understand the structure of the LGBT movement and its main streams. Anna Dovgopol, employee of Heinrich B?ll Foundation and famous activist, provided clarification regarding subtleties of understanding of gender and gender identity.

According to participants, pre-conference and workshops have become a serious motivation not only for them but also for facilitators – people ensuring group communication. Stereotypes about the inactivity of youth have been completely destroyed.

It remains only to add that all young activists also take part in the other important event of KyivPride – the National LGBT Conference. And the most reckless of them intend to stand for their rights during the public Equality March.

The Equality March in Kyiv was not held: the police kept aloof, Klitschko called on “not to hold a gay pride parade” (VIDEO)