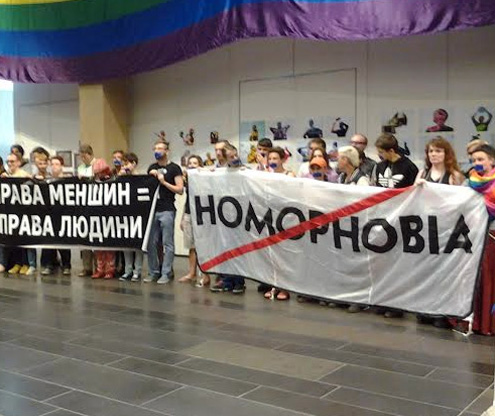 The Equality March in Kyiv was not held: the police kept aloof, Klitschko called on “not to hold a gay pride parade” (VIDEO)

The Equality March, which was scheduled on the 5th of June in Kyiv within the framework of KyivPride2014, was cancelled. Organizers announced that the reason for that was inability of the city authorities and police to ensure the safety of participants of this action.

After the representatives of the KyivPride Organizing Committee received a clear signal that the police wouldn't perform their direct functions, and the media spread the call of the Kyiv mayor Volodymyr Klitschko "not to hold a gay pride parade", the activists clarified the situation to the mass media and dotted the i's.

The inscription on the picture says: "Minority rights = Human rights"

"Once again I would like to clarify the difference – now I am retransmitting the messages that the conduction of gay pride is planned in Kyiv. It is not a gay parade, but it is the Equality March of all those people who speak about our fight against discrimination towards all vulnerable populations, including LGBT people, – declared one of the representatives of the Kyiv Pride Organizing Committee, the leader of the NGO "Insight" Olena Shevchenko. – We have planned this March in advance, this year it has been organized by the coalition of non-governmental organizations that joined their efforts to declare that the problem of discrimination in Ukraine generally exists, and something has to be done. The Equality March has nothing to do with the carnival or any other entertainment event".

The inscription on the picture says: "Human rights – my pride. Amnesty International"

According to Olena, an official request to conduct the March was submitted in advance. The organizers made every effort to coordinate it with the representatives of the Kyiv city administration and the police. However as a result the police announced its inability to ensure safety of participants of this event and kept aloof and the administration officials warned that if the action took place, it would be considered as non-approved.

Tatiana Mazur, executive director of the human rights organization Amnesty International in Ukraine, declared that the cancelled March should have emphasized the importance to respect the human rights of all people – regardless of nationality, religion and sexual orientation. "Today we speak about the fundamental rights, – she noted, – about the right to freedom of assembly and the right to freedom of expression ". Mazur reminded that Ukrainian authorities took responsibilities by signing a number of the international agreements, in particular – The European Convention on Human Rights. "And today we are very sad to admit that unfortunately just a few months after the beginning of Maidan the new Ukrainian power hasn't passed the test on the ability to ensure human rights for everyone. Today it has discriminated the LGBT community".

To Prague – on Pride!