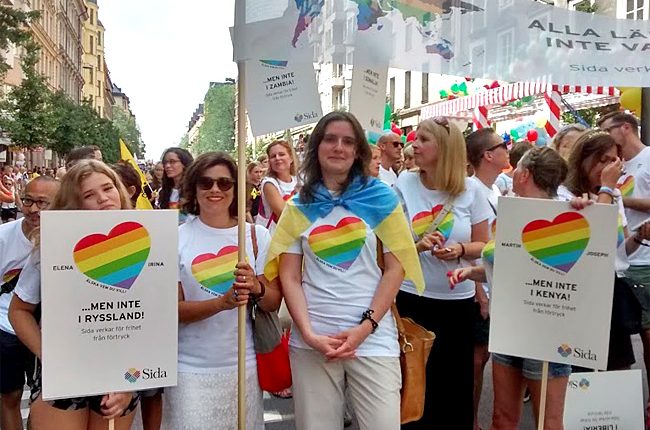 Last week in Stockholm took place one of the largest EU Prides. About 60 thousand people applied to participate in the march, yet many joined the column on the way.
In the column itself were walking representatives of basically all political parties of the Parliament, and it was headed by the Prime Minister John Fredrik Reinfeldt. Pride in Stockholm is an important political event, therefore not only representatives of the authorities, but also of business structures try to take part in it. And even better – to put a tent in Pride Park.

Pride Park itself is quite an interesting place. It is situated on a large stadium, where, apart from the usual food stalls and a large stage, located a few dozen tents of companies, shops, parties and, of course, the Government of Sweden. It is here where you can meet the representatives of the Ministry of Foreign Affairs and the Swedish International Development Cooperation Agency (SIDA).

Long before the beginning of the event itself every participant of Pride Park considers how to become interesting for their visitors. Sweets and souvenirs –  go without saying. And also – quizzes, directly related to the subject of the event. Do you know that same-sex relationships were decriminalized in Sweden in 1994, and that the Government of Sweden has been taking part in prides for 10 years already? If you answered the question correctly – you receive a present. SIDA also suggested a quiz and it was very flattering to hear that the answer to the question about which countries are being supported by this organization, many people mentioned namely Ukraine.

In the government pavilion the participants were offered to vote on which working area with LGBT community should become a top priority for the Cabinet of Ministers: working with youth, families with children, or countering discrimination. In the political camp of Pride Park were presented even Christian Democratic and Conservative parties of Sweden.

Within the framework of Pride Week in Stockholm a representative of UPO "Gay Alliance Ukraine" Valentyna Gladun took part in a panel discussion on the current situation of LGBT people in Eastern Europe. Speakers included representatives of other Ukrainian public organizations, as well as from Georgia, Moldova and Russia. Was discussed a plan for future cooperation at the regional level in these difficult for the region times.