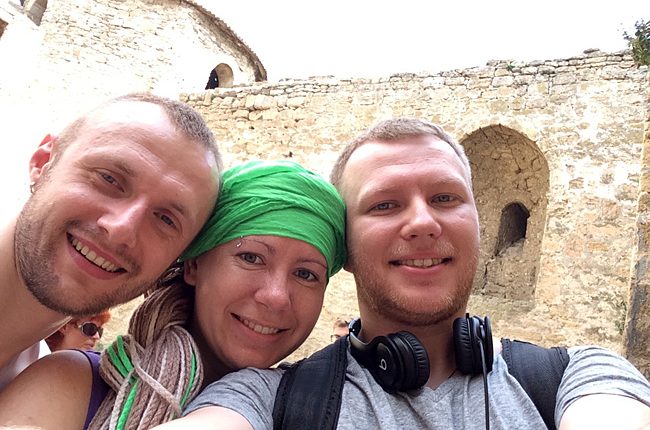 Within the MunichKievQueer Week in Odesa activists and volunteers of QueerHome in Kryvyi Rih, Kyiv and Odesa together with their guests from Germany visited one of the most interesting historical places of Ukraine – Bilhorod-Dnistrovskyi (Akkerman) fortress founded in the 13th century by khan of the Golden Horde. The fortress is situated near the ancient ruins of the Greek settlement.

This guided tour was particularly interesting as it was organized by the head of Excursions Department of the municipal enterprise "Fortress", historian and archaeologist Tina Mikhailovna Fedoseeva. Therefore, the participants of this peculiar expedition were able not only to visit the common tourist part of the Fortress, but also to see places still being under archaeological excavation.

Akkerman Fortress is one of the best preserved fortresses on the territory of Ukraine, moreover, it is superior to all other similar structures for its size. Despite the historical importance, the fortress a long time was in a very poor condition and was fully presented to tourists only in 2011.
The Fortress stands on the the rocky shore of the Dniester estuary and takes the form of an irregular polygon. Previously, it consisted of four yards; each had a specific appointment and could lead an independent defense. All the buildings of the Fortress enclosed by strong walls, which are about three kilometers long.
Visiting the Fortress has become one of the most outstanding events of the Queer Week in Odesa. Not only the guests from abroad, but also the majority of Ukrainian activists visited Bilhorod-Dnistrovskyi for the first time.