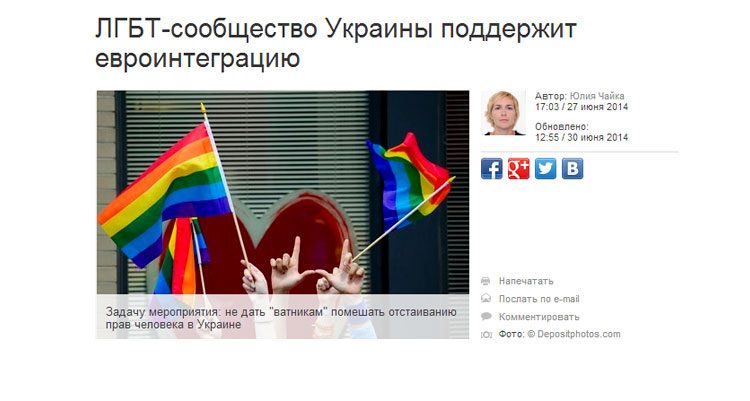 The inscription on the picture says: "Headline: LGBT community of Ukraine will support the European integration. Comment to the picture: The task of the event: not to let "vatniks" interfere with upholding of human rights in Ukraine"

Before launching a new cycle, the Organizing Committee of KyivPride2014 summed up final results. And now we are ready to share the results of the media monitoring, which are to our opinion quite interesting and educational.

We can already state with confidence that the International Forum-Festival KyivPride2014, which took place in the Ukrainian capital from June 30 until July 6, became the most talked-about event of the year in the context of LGBT topics. Monitoring of publications in the international web demonstrated that the authors of 476 articles, news and notes were not able to remain indifferent to the event. Information about KyivPride appeared not only on Ukrainian, but also on foreign resources.

The inscription on the picture says: "Headline: European values will come out to the Kyiv streets: on July 5th gay parade will be held in the Ukrainian capital. Sidebar (on the right):  Related News: * Hello Poroshenko: actions in Kyiv against peaceful settlement on the East, patriots threw a smoke grenade into the building of the AP * In Slavyansk a Parade will be held on May 9. People's mayor is preparing military hardware * The head of Venezuela's Opposition will organize a protest march * Arrests during the "Russian March" Comment under the picture: Ukrainian activists and gay patriots intend to participate in the Equality March. As reported the head of the Organizing Committee Elena Shevchenko, about 150 gay, lesbians and those who still can't decide on their gender identity will take part in the March"

What is most interesting and new for Ukraine: out of 317 texts, accompanied by photographs, 237 publications (around 74%) were adequately illustrated. Pink feathers, leather thongs and other joys of the Pride festivals in Europe and America, which have no relation to the Ukrainian LGBT movement, were observed only in 80 articles.
All the publications about KyivPride2014 can be divided into three thematic units:

1. Publications about the plans to conduct the Forum Festival, in particular – about the intentions to organize the Equality March, which was supposed to be held on July 5 within KyivPride;
2. Publications devoted to the response of state representatives, political associations, public representatives and international organizations to the KyivPride in general and the Equality March in particular;
3. Publications of "near- pride" nature (excursions into history of KyivPride etc.)

The inscription on the picture says: "Headline: In the fight against the militias the Ukrainian military forces backed by gays, lesbians, bisexuals and transgenders. Comment to the picture: Representatives of LGBT community "KyivPride2014" are going to announce their support within the "blue week" – the international forum-festival that will be held in the capital of Ukraine from June 30 till July 6."

The most highlighted were the following information causes (listed in descending order):

– on cancelling of the Equality March in Kyiv;
– on the reaction of the Kyiv city mayor Vitali Klitschko on the information about conducting the Equality March;
– about the intentions to conduct KyivPride and the March.

The main feature of publications on KiyvPride is clearly expressed political orientation, which is not surprising given the emerging sociopolitical situation in Ukraine.
In the headlines of the articles and in its texts were discussed such pressing issues as European integration, European values ("LGBT community of Ukraine will support the European integration", "European values will come out to the Kyiv streets: on July 5th gay parade will be held in the Ukrainian capital" ), situation on the East of Ukraine ("Conservatives are against gay parade in Kyiv: there is going to be a splash of violence in the Donbas and insurgency in the western regions, "In the fight against the militias the Ukrainian military forces backed by gays, lesbians, bisexuals and transgenders"), and relationship between Ukraine and Russia ("Anti-Russian gay parade will be held in Kyiv", "If not fagot – then moskal").

The inscription on the picture says: "Headline: If not fagot – then moskal. Text below: Author: Viktor Sokyrko, observer of the "Culture". Almost all the latest news from Ukraine colored with dark colors of war. But finally we may observe some rainbow colors as well. In a literal sense. In the capital of Ukraine is being held an international festival "KyivPride2014" – from June 30 until July 6 here gather together homosexualists, lesbians and representatives of the other sex minorities, who arrogated to themselves a right to use a rainbow as a symbol. "

Most publications – and it pleases – was written neutrally or positively, and generally represented a balanced information. However, there were those with clearly traced homophobic position. Tellingly, this year it was combined with no less active anti-Ukrainian position – homophobia and Ukrainophobia "in one package". Such publications were well-spread in a certain part of RUnet, mainly hardly known and / or regional sites. The articles were artificially modeled to anti-Russian orientation of KyivPride.
Often publications on KiyvPride were accompanied by brief information on how similar events were held during 2012-2013.

Overall it is impossible not to note some positive changes in the nature of covering the topic of Prides in Ukraine and we hope for even favorable response the next year.