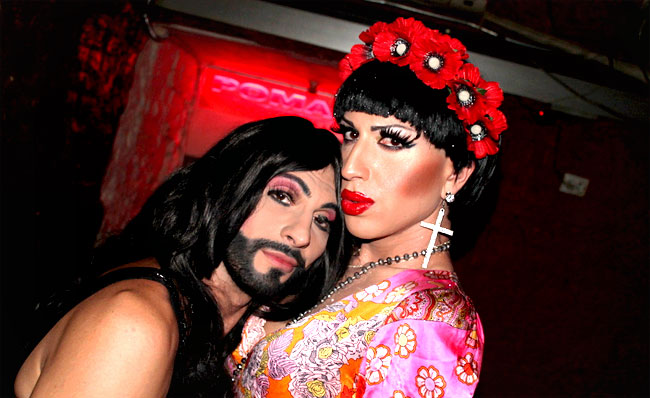 In the end of September Kyiv hosted the third contest of travesty artists – Miss Diva 2014. This time UPO "Gay Alliance Ukraine" became a partner the event.

Before the contest all the friends of our organization and visitors of QueerHome Kyiv were invited to a pre-party, where they could not only enjoy delicious food, but also performances by the contestants and win prizes from the organizers. The party was held in the creative space 12 and gathered about fifty guests. After the pre-party we all together moved to the club "Pomada" (Lipstick), where, in fact, the main part of the program took place.

This year eleven Divas from all over Ukraine took part in the competition – Odesa, Kryvyi Rih, Kyiv, Dnipropetrovsk, Lviv and Zhytomyr. The role of the hostess was undertaken by the star of the capital transvestite stage – Dana National.

The judges of the competition were represented by strict and respected people in the community – a singer Natanika, a famous stylist Ruslan Zaharchenko, a LGBT leader and an executive director of UPO "Gay Alliance Ukraine" Taras Karasiichuk, an odious fashion designer Sanatan, a designer, a writer and a performer Arthur Kulpovich and a singer Vlad Chekhov.

As a result as the winner was chosen the brightest Grizolda Storm (Odesa), and the title of Vice Miss was awarded to Brunhilda Golden (Kryvyi Rih). The third place in the competition – along with the People's Choice Award – received Maidana the Fire.

The whole evening the club was filled with an easy relaxed atmosphere. Despite a competitive spirit, the mood of the contestants was playful and, what is the most important, – catching: it was quickly passed on to the guests.

In the nearest plans of GAU to support a Mr. Idol Contest, the winner of which will travel to represent Ukraine at the Mr. Gay Europe. Do not miss it!!