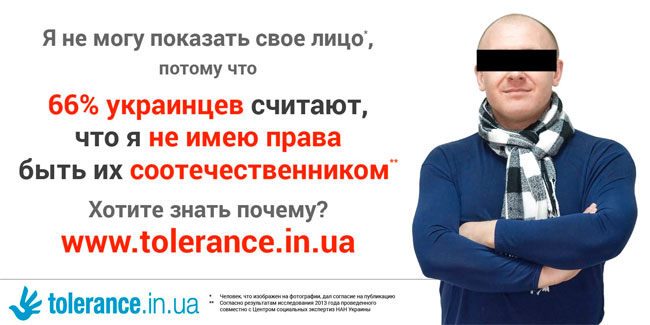 The inscription on the picture says: "I can't show my face* because 66% of Ukrainian citizens believe that I have no right to be their compatriot** Do you want to know why? Then visit: www.tolerance.in.ua/ *The man on the photograph gave his consent for the publishing/ ** According to the results of the Public Opinion Survey conducted in 2013 by UPO "Gay Alliance Ukraine" jointly with the Centre of Social Expertise of the Institute of Sociology of NAS of Ukraine"

UPO "Gay Alliance Ukraine" summed up the results of pilot phase of the campaign on increasing public awareness in Ukrainian society about tolerance and human rights. The conclusions are clear: the campaign worked well, so early as next month the main phase of the project will be launched.

The project includes a set of various activities, and the campaign itself has been designed to influence not only the members of the LGBT community, but also society in general – it facilitates the process of bringing the two sides closer.

The regions, where all the work is done, are the same – Zhytomyr, Odesa, Kryvyi Rih and Lviv. During the pilot phase regional coordinators gained useful experience and established contacts and people living in these cities learned about human rights. Or, at least, heard something about it.

During the main phase of the campaign will be used the best proven methods: banner advertisement, flash mobs, distribution of leaflets and work with the regional mass media. The webpage Тolerance.in.ua, containing basic information on human rights and tolerance, will be actively filled and developed. Furthermore we are planning to organize roundtables for journalists and activists.

There will also be fundamentally new types of work. One of them is implementation of a small educational seminar for university students. To develop the materials for such seminar we will actively involve the experts in the office of the Ukrainian Parliament Commissioner for Human Rights.

It is also planned to develop a training module for psychologists of LGBT organizations on effective methods to work with the community to increase the level of self-awareness among its members. In particular – on the protection of human rights and freedoms. On this topic will be held three days training for psychologists.
In the nearest future we will introduce you to a detailed description of of the project, which will be published in a similarly-named section of our website.

Related link: What do Ukrainians know about the Human Rights? Variety of opinions on this matter presented in our new video