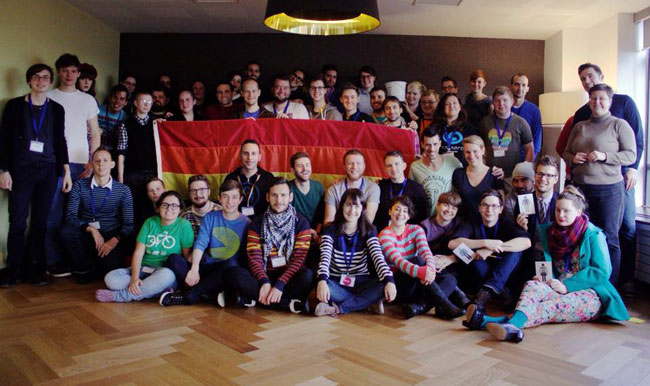 IGLYO – is a network of youth and student organizations operating in and outside Europe uniting about 80 member organizations from 40 countries.
This year IGLYO celebrated its thirtieth anniversary. At the celebration reception in the City Hall was attended by those who created the network and those involved in the work of this organization on its different phases. At the opening were inspiring speech by representatives of Dublin city authorities and members of the biggest LGBT-organization in Ireland Belongto.

Participation in the General Assembly is a useful resource for our organization providing an opportunity to communicate and foster cooperation between representatives of LGBT communities in different countries, share experience in relation to observance of human rights and legal regulation of the problems that homosexuals face in everyday life.

During the General Assembly the delegates elected new members of the board and exchanged experience within the workshops and plenary discussions. Among candidates to enter the board was Andriy Zarytskyi, a representative of friendly organization LiGa from Mykolaiv. This time a large amount of attention was paid to the problems associated with transgenderity and non-Heteronormativity.

In the nearest future IGLYO is planning to focus efforts on education, social inclusion and intersectionality – studying the interaction of multiple systems of oppression and discrimination. At the General Assembly was repeatedly being raised the issue of the situation with LGBT youth in Eastern Europe.

The next session of the IGLYO General Assembly will be held in 2015 in the Romanian Bucharest and UPO "Gay Alliance Ukraine" is planning to join this meeting.

The way it happens, or Bizarre political scenery