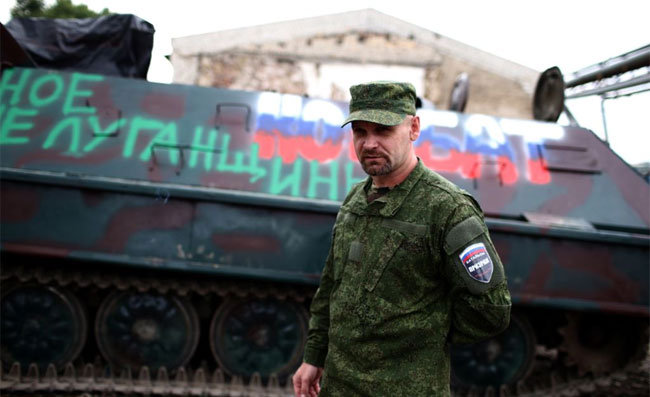 The former Advisor to the Minister of Defense of Ukraine, Head of the Center for Defense Reform and the coordinator of the civil movement "Spilna Sprava" ("Common Cause") Alexander Danyluk reported on his on his Facebook page about so-called "LPR" introduced the death penalty for homosexuality, and had already shot the first accused person.

"Mozgovoy introduced the death penalty for homosexuality. Today they shot the first person accused", – posted on Danyluk's Facebook page. The post was published on November 14.

Aleksey Mozgovoy is a leader of terrorist gang "Ghost", which is currently operating in the region of Alchevsk, which is under control of "people's militia LPR". Not so long ago all over the internet was widely spread a video capturing the first "people's court of LPR". There was Mozgovoy among its participants who spoke at the "meeting" with a speech. An abuser was sentenced to death. Mozgovoy declared that it's not a place for women to go to pubs: "If you want to stay honest and faithful to your husband – sit at home, embroider with a dagger. I will give a special order to my patrol – all the girls that are seen in the pubs will get arrested. Then we'll see how you sing a different tune… А woman should be the guardian of the hearth, the mother. And what kind of mothers do they become after pubs? What can they teach? What example to give? … A woman should stay in the house baking pirozhki ["small pies"] and only celebrate [meaning "drink" in this context] on the International Women's Day (March 8)".

As we already reported, earlier the website of the terrorist "Russian spring" referring to the Ukrainian supportive journalist Vsevolod Felimonenko reported that LPR introduced "criminal liability for homosexuality" – prison sentence for a term of up to 5 years.

"On September 26 in Lugansk was held another meeting of LPR parliament. Strange people in the audience who call themselves MPs voted by a show of hands for ensuring the rights of citizens of the People's Republic, the protection of their cultural, religious and moral values, – wrote Filimonenko on his Facebook page.- In order to effectively implement this initiative, the deputy of the popular assembly by the last name Khokhlov, introduced for a consideration of parliamentary members a draft law "On the Protection of the Christian traditions of the people of LPR from the corrupting influence of customs of the enemy states, such as Ukraine, the European Union, Canada and the USA".

Aleksey Mozgovoy himself denied information that in LPR was executed the sentence of dead penalty of the homosexual. He assured the Russian journalists that nobody introduced any executions for homosexual orientation on the territory of LPR. "No one was executed. This has never happened here", – said the leader of the militants. According to Mozgovoy, prohibition of the same-sex relationships would have been supported by the majority of "normal men". "But given the howling and stink of the world community, no one will dare to do it directly", – he added.

Danylyuk immediately reacted on this statement on his facebook page: "Scared by reaction of the international community Aleksey Mozgovoy disowned his own fighters, who shot a person accused of homosexuality and reported that homosexuality is not prohibited in LPR. Given the sudden liberalization of the terrorist's views, we can predict that there might even be a legalization of gay marriages in the young republic in the foreseeable future".