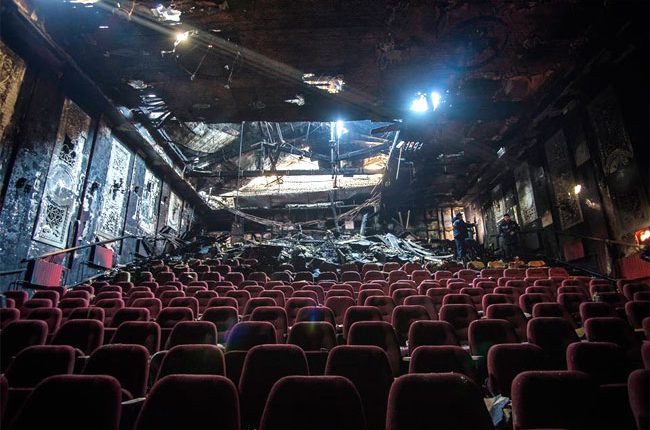 Kyiv authorities started the process of leasing out "Zhovten" movie theatre to "Kinoman" TOV (LLC). Thus, the demands of activists who organized meetings and protest actions after the arson of the movie theater, seems to be satisfied. However, the problems of Ukrainian LGBT community on this background are once again forgotten.

At the session of Kyiv City Council on November 12 the deputies adopts the draft decision "On leasing out without a tender of integral property complex movie theatre "Zhovten". According to the draft, the movie theatre is planned to be given to rent to "Kinoman" TOV (LLC), which represents its labor collective until April 1, 2020.

The same day, about two dozen activists came under the CEC building where the sitting of Kyiv City Council took place to arrange another picket with demands as soon as possible to renovate the movie theater and prevent its transfer into the hands of the investor with the subsequent privatization, which developers have been seeking for many years. About it writes PressOrg. One of the organizers of the action "Return Zhovten" Sergei Shchelkunov noted that in the first place activists demand of the capital authorities to assist the earliest restoration of the movie theater, as well as transparent and effective investigation of the arson of the building. The activists came in yellow colored clothes, carrying banners and chanting "Bring back my "Zhovten". The culminating point was the theatrical performance, during which the "customers" and the "raiders hooligans" destroyed with a baseball bat models of houses that are no longer in Kyiv.

Thus, at this street action once again was raised a topic of "raiding and customers", although both arrested on charges of arson of the movie theater declared that wanted to disrupt showing the movie "Summer nights", which was shown in "Zhovten" within the framework of the queer section "Sunny Bunny" of film festival "Molodist". It is obvious – it's what in developed countries called a hate crime and even a terrorist attack. However, in Ukraine, similar concepts are not even considered. They haven't mentioned about homophobia in the context of what happened starting from the point when during the previous street action, much more numerous, spoke one of female leaders of Ukrainian LGBT movement Olena Shevchenko. Sometimes in the news it is shamefacedly mentioned the intention of attackers "to disrupt showing of the LGBT-related movie". They have intentions to incriminate them hooliganism and damage to property.

The suspects of setting "Zhovten" on fire sit under house arrest – are a student of one of Kyiv universities and his unemployed buddy (aged 20 and 24 years old). In criminal proceedings about the arson have been appointed about a dozen of different examinations. Including – fire-technical, chemical and explosive. In addition, due to the "identification of weapons and ammunition from persons suspected of committing crimes has been appointed ballistic and investigative investigation", reports DSnews.

Kyiv Mayor Vitali Klitschko misspoke, saying that he would donate 100 thousand hryvnia to restore  "Zhovten" movie theatre – in fact, he was going to donate only ten, "Korrespondent" writes.

"I am being not indifferent ready to donate to this fund hundred… ten thousand hryvnias. From my personal funds", – Klitschko said. When journalists tried to clarify by the Mayor if he wanted to donate 100,000, he called back, "not to speculate who should give and how much".

Last week during the international conference in Germany Mr. Klitschko gave an unequivocal answer to a question by Munich City Council representative Lydia Dietrich. He stated that lesbians and gays do not fit into his concept of human rights and that's why he is not going to protect them.

"An action in support the movie theatre "Zhovten"