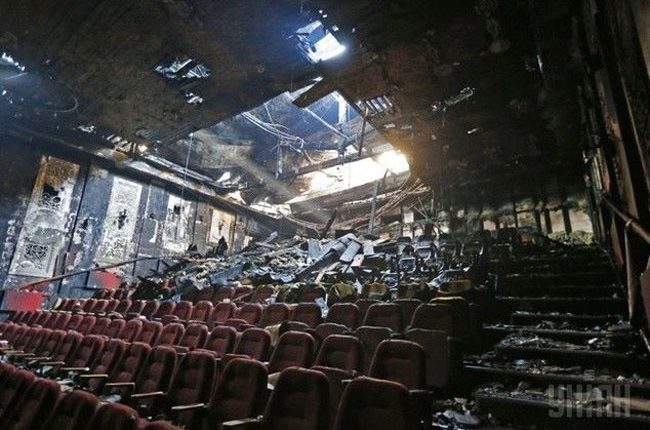 Police detained two people suspected of committing an arson of the oldest Kyiv city movie theater "Zhovten". It was announced by the head of the Ministry of Internal Affairs of Ukraine Arsen Avakov on his Facebook page.

"A student of Kyiv city’s university and his unemployed friend confessed of committing the crime. During a search of hostel, where arrested lived, were found three RGD grenades. Now the arrest of the two detainees is being decided. The investigation continues – their customers will be identified", – wrote Avakov.

Earlier, Advisor to the Minister of Internal Affairs Anton Gerashchenko said also on Facebook that the detainees revealed the motives of their action. "They wanted to commit their act of hooliganism at the film show on LGBT-related topic, which was conducted under the international film festival "Molodist", in order to disrupt this particular movie session thereby showing their contempt for LGBT community in general", – wrote Gerashchenko. At the same time he also added that "if we are aiming to Europe, we should respectively promote racial, religious, sexual tolerance of some Ukrainian citizens to other citizens. Luckily no one has died because of this arson".

According to Gerashchenko, a court will decide whether to blame arsonists of malicious hooliganism and destruction of another's property or of deliberate destruction of the property.

Nobody speaks of the hate crimes.  As we’ve already wrote, such crimes are usually being classified in Ukraine not under the Article 161 of the Criminal Code – "breach of the equality of citizens", – but being prosecuted just as "hooliganism". In this case – the malicious one. The articles of law on hate crimes do not exist in Ukraine. Probably, what happened to "Zhovten", as well as the fact that criminals set it on fire exactly during a session within the LGBT section of the film festival "Molodist", – is a reason for human rights activists to insist on changes in the Criminal Code. The arson of “Zhovten" is considered to be a hate crime only in the US State Department.

It is also interesting to follow on how, in the light of the information received, public attention will now focus on the unacceptability of homophobia, or the officials will once again "shut down" this topic. Especially since the day after the arson of "Zhovten" was openly committed  another homophobic attack on a cinema "Kinopanorama", where the movie shows of the “Sunny Bunny” section continued. Responsibility for the second attack was taken over by an organization "Trident", which is a part of the "Right sector".