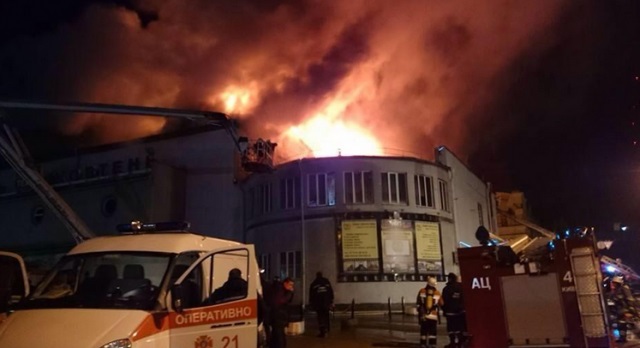 In Kyiv late in the evening on October 29 the unknown intentionally made arson to set on fire one of the halls in "Zhovten" cinema theatre during a session of the movie "Summer Nights" within LGBT Competitive program "Sunny Bunny" of the "Molodist" film festival. Motive of the arson might have become homophobia, believes headmistress of the cinema theatre Lyudmyla Gordeladze. She reported it to a correspondent of TV channel "112 Ukraine".

"It was an Arson. It happened during the movie session about nonconventional sexual orientation. This programme (LGBT program "Sunny Bunny" under the framework of film festival "Molodist" – editor's Note) caused displeasure among certain people", – stated Mrs. Gordeladze.

The "Summer Nights" movie is about life stories of transgender people. The movie theatre, as it is now become clear, was set on fire intentionally.

"In the beginning there was some hissing sound, but most people did not pay attention. Then from upper rows someone shouted: "Smoke!" – and after a short time the fire became visible," – told Oleksiy Chashchyn, the coordinator of the "Sunny Bunny" program who was present at the movie session, to "Podrobnosti".

According to him people quickly left the premises, but the fire in a building was not being extinguished immediately.

"Everyone rapidly mobilized and left the hall; the staff of the cinema walked around the other halls of the cinema and led the people out. Then a fire engine arrived, but apparently it was not enough, since smoke had already started to pour out of the windows of the second floor's lobby. We had to wait at least half an hour for the reinforcement of firemen. By that time the roof of the cinema had already burned with flames", – said Oleksiy.

Other eyewitnesses reported that a fire in the theater in Podil erupted because of the smoke bomb. "We came to the "Zhovten" cinema to watch the movie "Summer Nights" within the framework of the "Molodist" film festival. During the movie the unknown threw a fiery smoke bomb behind our back"- said Eugenij Zelman, the witness of the incident.

Earlier, when posters of the "Summer Nights" movie only appeared in the city, the unknown started to write the threats on them, demanding to cancel the show, reports "Profi-Forex".

As it was reported at the headquarters of the State Emergency Service of Ukraine in Kyiv, the fire started around 21:45. Arrived on the scene rescuers found on the roof of the building three sources of ignition. The total area of the fire was 300 square meters.

Kyiv Mayor Vitali Klitschko also arrived on Thursday night at the scene of the fire of "Zhovten" cinema. "The arson of the premises is possible, as for the past several years it has been the subject to disputes and lawsuits. We will not let to take away "Zhovten", which long ago become the symbol of intellectual movies for the capital city viewers", – he stated.

The second version of the arson – the protracted conflict around the premises of the cinema theater "Zhovten", which has been fighting for 11 years with regular attempts to being evicted.

In the beginning of February the decision was made that the cinema should stay at its premises. But the agreement on lease extension has not been jet concluded. In October it became known that the Kyiv Economic Court satisfied the claim of prosecution and the movie theater returned to communal ownership. Private company "Kinoman" which's created by an employees of the movie theater, was  obliged to release the premises. Now that decision is being contested in court.

That part of the Podil district, where located the movie theater "Zhovten", is being more and more overbuild. Near the cinema itself more than once were made attempts to start a new building, despite the fact that the law expressly prohibits to evict places of culture without giving them an equivalent venues.

In the night of October 30 Klitschko reported that he indents to hold on Thursday an operative meeting with the heads of the relevant agencies of the capital city concerning the situation around the cinema and discuss prompt recovery of "Zhovten".