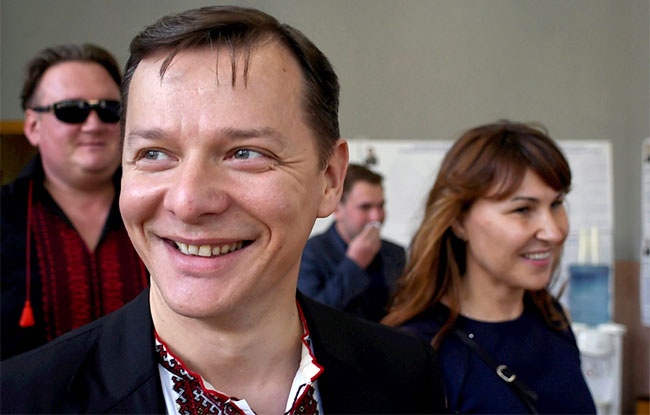 "We officially state that we do not recognize these elections to the Verkhovna Rada of Ukraine – there is nowhere near the democracy, there is everything about Nazism", – announced on the air of "Russian news service" the leader of Russian communists Gennady Zyuganov.

Related article: We can not choose our voters

He also announced that "mainly won brown colors of different shades" and that is "a tragedy for Ukraine, for Europe, for Russia". At the same time, according to the RNS, Zyuganov noted that "there are some normal people at the single-mandate constituencies," but he did not mention their names, "so they not to become a victim of revenge by Dmitry Yarosh – the leader of the "Right sector".

Zyuganov also praised the Ukrainian colleagues – mentees of Petro Symonenko from the Communist Party of Ukraine for that "they refused to participate in this parade of brown criminals, thieves and rapists".

"The Communist Party of the Russian Federation can not work with this herd. We will work with certain people who have system of values, who seek for humanism. And we are not going to work with psychopaths and queers, who wormed their way there "- said Zyuganov.

Saying "queers" he, probably, ment Oleh Lyashko and his "Radical Party", which showed quite good results according to preliminary results of the elections. Lyashko himself has already announced that he is ready to start negotiations on a coalition: "None of the political parties got enough votes to create a  sole majority. It is obvious that building a coalition will be the result of agreements between pro-European and pro-Ukrainian democratic forces", – wrote MP on his facebook page.
In his time Lyashko became infamous with homosexual scandal "with another Borya", and therefore "Kiselev-oriented" Russian media refers to him only as "gay fascist".

However, some Ukrainian politicians distinguished themselves by no less xenophobic discourse, which once again testifies  that the concept of "democracy" for the national political elite often ends where it LGBT topic begins. Thus, Arsen Avakov, the Minister of the Internal Affairs, stated that his political force ("People's Front") is not going to be in one coalition with the Lyashko's Party. According to Korrespondent, Avakov declared the following: "We'll join (the coalition) with all the political parties from the Maidan, with democracy forces. <…> But only with democracy forces, not with queer ones".

Shortly before the elections a video appeared in the internet. On the video "a person who resembles the representative of the Lyashko's Party" was having sex with another man. The video clip, undoubtedly, was on of the elements of the unprecedented wave of so-called "black&blue" PR. During these elections, which were supposedly intended to consolidate the gains of "Dignity Revolution" and clean up the authorities, such PR was activated in the volumes much higher than analogous "splashes of political activity" in previous political campaigns.