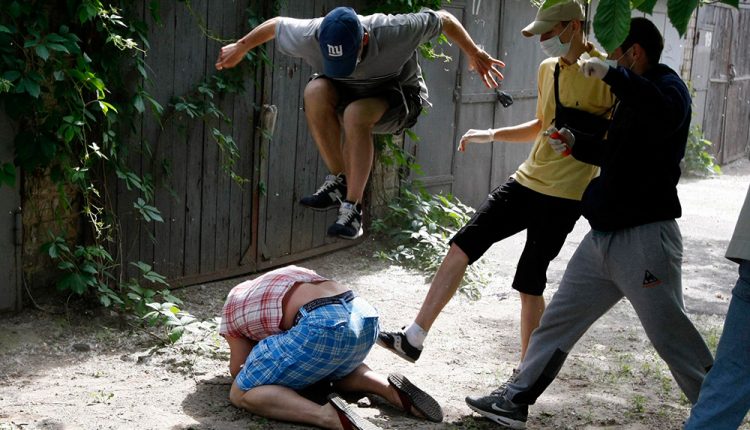 Nationalist organization "Tryzub" (Trident) – that at one time initiated the creation of the "Right Sector" – calls it a matter of honor to violently oppose to "degenerates" and "bastards" with "perverted norms of life", promising to continue to deal with "destructive ideas", which, according to the radicals, are coming to us from the West. It was reported on the website  of the organization.

"The action organized by the "Right Sector" on October 31 in movie theatre "Kinopanorama" proved to be effective. After the visit of the nationalists the organizers of Sodom's propaganda abandoned their plans to show anti-Christian movie", – said in a statement. It is about disrupting the show of LGBT movie "Max and others" from the movie programme "Sunny Bunny" of the film festival "Molodist". At the same time the nationalists are convinced that decent people should have supported storming of "Kinopanorama" and consider everyone who criticizes "the action" to be "degenerates" as well.

Nationalists have long been acting according to the principle "the dogs bark, but the caravans move on", noted in a statement. "Despite the barking of liberalish people, nationalists will continue to fight and provide resistance to destructive ideas coming to us from the West. Thank goodness, we have enough strength carrying weapons in our arms to defend our land from the onset of neo-Bolshevism in the East and to punish officials who scoff at people, and to oppose those bastards who fight against the remnants of the morality of our people trying to impose on us their perverted norms of life, "- said in the message.

"We consider force methods as the real way to combat the spread of this liberal contagion our lands", – stated in the appeal. Radicals believe their main achievement in this field is preventing "gay parades" in Kyiv in 2012 and 2014. "Meanwhile the violent opposition against degenerates for us, first of all, is a matter of honor. In times when the world is going upside down, it is our sacred duty – to speak up clearly through our actions what is good and what is evil, where is  the norm, and where – pathology, "- said in the manifesto.

The movement "Tryzub" (Trident) named after Stepan Bandera, which was created by Dmytro Yarosh, has been operating since 1994. Since that time Dmytro Yarosh has held different positions in it. According to his words, "Tryzub" has three main objectives: propaganda of the ideology of Ukrainian nationalism in the interpretation of Stepan Bandera, upbringing Ukrainian youth in the patriotic spirit; and the national protective activities, that is, the protection of honor and dignity of the Ukrainian nation, under any conditions by all available means and methods.