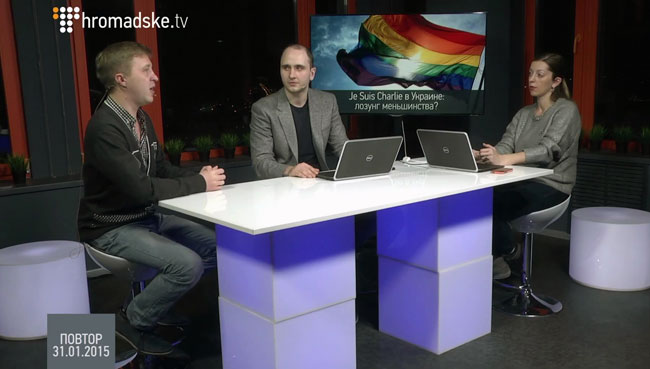 Аn executive director of UPO “Gay Alliance Ukraine” Taras Karasiichuk spoke live on Russian-language broadcast of HromadskeTV in the program dedicated to the future of Ukraine.

Conversation started with a discussion of the situation that emerged after the arson attack on “Zhovten” cinema, which, as you might remember, took place during the show of the movie “Summer nights” in the framework of queer-section of the international film festival “Molodist”. After being detained criminals confessed that did it deliberately – in order to “disrupt screening of the LGBT-themed film”. As a result they would be prosecuted for “hooliganism”, although this crime should be classified as an act of terrorism based on a hate.

The conversation was about homophobia in the Ukrainian society and was very intense and informative. Taras actualized the problem, talked about changing of the perception of LGBT-related topics in Ukraine within recent years – especially in the light of the European integration course of development that we have chosen for our country. They also spoke of KyivPride (and about how it differs from the "gay parade" as it often mistakenly referred to in the mass media), pride movements in general, and whether there is a need to publicly discuss these issues at all.

According to Taras, after the revolutionary events of the last year the situation with LGBT in Ukraine is improving, although very slowly. Many factors contributed to this state of affairs, which was discussed in more details during the conversation.

HromadskeTV (hromadske.tv) – is a well-known in Ukraine and abroad civil journalistic initiative to create social media. Initiators of the project believe that every Ukrainian has a right to know.  Knowledge, erudition and dialogue create a society that can make decisions and take responsibility, being safe and comfortable for all its citizens.

Photography as a tool to combat discrimination