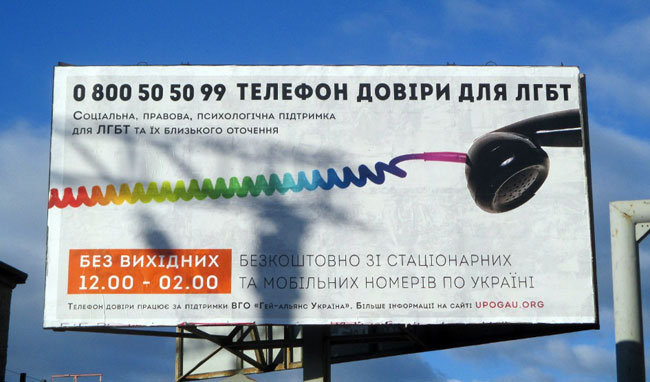 The inscription on the picture says: “0 800 50 50 99 Hotline for LGBT. Social, legal, psychological support for LGBT people and their close ones. Seven days a week, 12.00 – 02.00 Free of charge from stationary and mobile phone numbers in Ukraine. The telephone helpline works under support of UPO “Gay Alliance Ukraine”. For more information please visit: https://upogau.org”

Was launched the active phase of the advertising campaign Hotline for LGBT people. Now the information about the telephone helpline is being spread not only through internet, but also via outdoor advertising.

At first we worked only through social networks – they ensured recognizability of the hotline, however such advertising could not help us to reach certain segments of our target group. That’s why the decision was made to come out offline.

The initial step was to place advertising in Kyiv metro and city trains. The results were immediate: in the first week after placing the ads in metro the number of calls increased significantly. Callers of the older generation who do not use social networks have started to approach us and requests themselves became more diverse.

Inspired by such success, we placed our banners on the streets of three Ukrainian cities – Lviv, Kharkiv and Odesa.

Even though placement of the advertisement has already been paid off by increasing of calls at the hotline, we would like to be helpful to even a broader range of users. Our consultants are being regularly trained and supervised, so they are ready for the increasing demand.

Let us remind that the project “Hotline for LGBT people in Ukraine” has been implemented by UPO “Gay Alliance Ukraine” for four months already under the support of the Embassy of Canada in Ukraine.

The telephone helpline operates seven days a week from 12:00 till 2:00. Calls on the territory of Ukraine are free of charge. All calls are strictly anonymous and confidential.