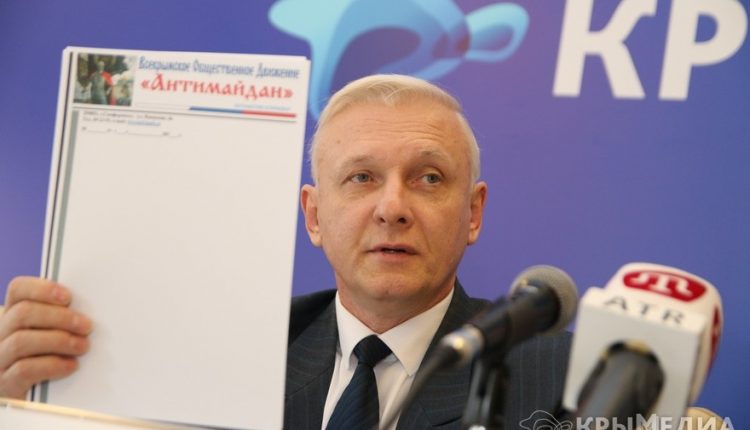 In the Crimea was created an informal public movement "AntiMaidan", which will act to support of Putin, as well as to fight against “Fifth Column”, corruption and gay people. It was reported by the information agency Crimea Media.

The overall objective, according to "AntiMaidan" activists, is to support Russian President Vladimir Putin and the fight against "anti-Russian forces" represented by a "Fifth Column". “In order to show that Russia is united and undivided and it will be impossible to shake this situation out”, – explained one of the “AntiMaidan” founder Vladimit Tyunin at the meeting of the movement activists with journalists that took place on February 19 in press center “Skif-Media”.

«AntiMaidan» activists are planning to devote themselves to holding of pro-Putin actions in order to prevent the Crimea from any “Bolotnaya”, as well as working in the regions. “If it will be necessary, we can also give a thump on the head”, – added Tyunin.

On top of that the activists of the newly-formed movement are intended to fight against local corruption, "arrogance and rudeness of some officials", as well as to prevent conductions of “gay-parades”.

Co-founder of the movement Tatyana Savitskaya noted that public activists are planning to promote Orthodox holidays: “Bring to people our Orthodox holidays. Whether it is the day of awakening a bear, <…> Sviyatobor holiday, All Lovers Day at our Ivana Kupala".

According to Tyunin, their organization supports the all-Russian movement of the same name, but at the same time they believe that initiatives should "go from a below" – from the citizens themselves. Because of it, he specified that "AntiMaidan" activists of the peninsula do not plan to register their organization, so that it does not bureaucratize.

The founders of the "AntiMaidan" were “Tavria Union”, “Russian sodality “Sobol”, Russian sodalities in Alushta and Feodosia and other organizations of the peninsula.

Let us recall that last September the Kremlin-appointed leader of the Crimea Sergey Aksenov stated that gay people are not welcome on the peninsula and the authorities would never support them. “In the Crimea such people [gay] are not welcome, not needed and they will never conduct any events publically. I can guarantee it”, – promised then Aksenov.