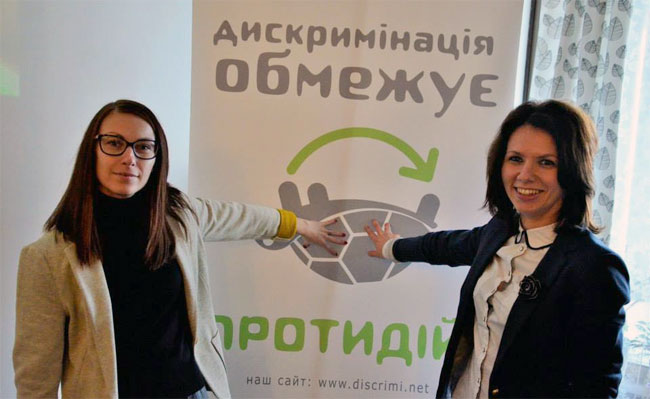 What is discrimination? How to see it and what to do if you have become a victim of this phenomenon? All these questions will be addressed under the campaign launched with the video presented in this article.

In daily life many of us don't think much about whether discrimination exists or not, especially if we think that we can not be affected. As long as we personally, or our relatives, friends or acquaintances do not have to face limitation of our rights. However, very few people manage to restore their rights or to receive a service they were denied in. It happens because we do not know how to act in such cases and what we should do.

“You might not see me, but I am here…
We often do not pay attention, but our world is full of different restrictions. Some people are refused of a job because they are only 20 years old, others – because they are 40. Some qualified professionals are still refused to be promoted just because they are females. A refusal to rent an apartment can be based only on the fact that future lessee is not Ukrainian. Some can be refuses of services just because they wear hijab. Because of the state of health people can be refused in obtaining medical services. A person with a disability can not get into the club because of the lack of special ramps. Someone are oppressed because of their sexual orientation and some are humiliated because of the level of their education.
This unequal treatment, which deprives of opportunities, is called discrimination. However, some of us prefer to ignore the facts of discrimination. And the government does not recognize the problem in general. This leads to the fact that those who has faced a violation of their rights do not know how to fight for them.
Attention! You can become one of those people!
Discrimination limits – act against!
To learn how exactly to act please visit an official campaign website: www.discrimi.net".

Civil society activists are going to provide information via website Discrimi.net and social networks, as well as to create and post different video clips on YouTube, to conduct street art events, engage the mass media, organize flash mobs and street actions. Already now users of social networks can familiarize themselves with info graphics about why in today's Ukrainian situation internally displaced persons (IDPs) are in no way should be called refugees.

During the presentation the visitors were able to see the first video clip from the series about what discrimination is.

The Coalition for Combating Discrimination in Ukraine – is all-Ukrainian non-governmental civic human rights initiative founded in 2011 and which currently unites 50 organizations representing civil society in our country. UPO “Gay Alliance Ukraine” has been a member of the Coalition since 2012.

The activities of the Coalition are aimed at ensuring the principle of civil equality for all people, regardless of their social or individual features that are recognized by international, European and national law as the ones that require protection from discrimination.