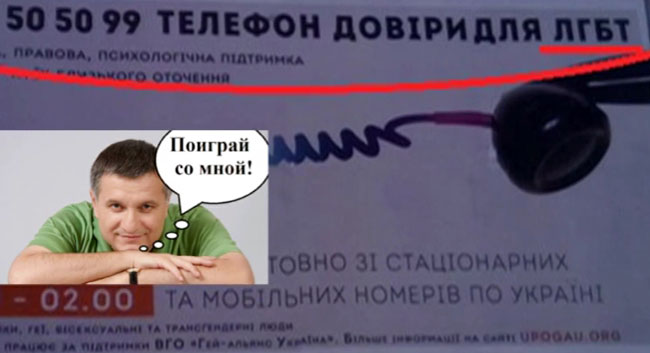 According to “AntiMaidan”, Lyashko and Avakov are consultants at the LGBT Hotline

Street advertising campaign of telephone hotline for LGBT people, which was just recently launched by UPO “Gay Alliance Ukraine”, has proved to be very effective. We had already written about it before, based on our own statistics, but recently we received another unexpected confirmation of the given thesis.

In a group of the AntiMaidan movement, infamous for its separatist orientation, appeared a video clip, in which was demonstrated one of our banners.

Judging by the content of this “video masterpiece”, creators of the video clip believe that MP Oleh Lyashko, Minister of Internal Affairs Arsen Avakov and the chairman of the Odessa Regional Council Olexii Honcharenko are working as a part time consultants of our LGBT Hotline.

We think that Mr. Avakov would be able indeed to provide professional consulting on legal issues, but, unfortunately (or fortunately), he has already a lot of other things to do.
It is also interesting that suspicion of Olexii Honcharenko homosexuality has been publicly voiced for the first time.  Clearly, the reason for that was his presence at the funeral procession in memory of murdered Russian opposition leader Boris Nemtsov, where Mr. Honcharenko was arrested by police in Moscow for wearing a t-shirt with a portrait of Nemtsov and inscription “Heroes never die” (in Ukrainian). Its logic can be easily traced: who else if not a gay person could possibly grieve about death of  “that liberal bastard”?

In all likelihood, the authors of the mentioned above video clip are sure that the context, in which Ukrainian political leaders are be mentioned, should influence public opinion. Because in front of us – is yet another example of the notorious “Black&Blue PR”. However so-called “homosexuality card” now can play only for those who are more interested in whom politicians sleeping with rather than what they are actually doing for our country. We would like to believe that there are not so many people like that in modern Ukraine.
Thanks to the powers of observation of “AntiMaidan” activists and invariably deep interest to the LGBT-related issues, now about 14 thousand people know about telephone hotline. Hopefully some of them would actually use this information.

This is not the first time when homophobes in an attempt to blacken certain politicians contribute to creating positive image of LGBT people in society to a greater extent than the official campaigns. Let us just recall the banners of political force “Ukrainian choice” that tried to scare Ukrainians by the fact that “Association with the EU – is a same-sex marriage”. On the banners were pictured very nice same-sex couples, with no hint of antipathy.

The inscription on the picture says: “Association with the EU – is the same-sex marriages Ukrainian choice warns.”

At the same time it keeps surprising how people, who today have tanks and artillery, still feel defenseless before the “onset of homosexual hegemony”.
The only wish to authors – is to update playlists, since a single “Blue moon” is morally obsolete for quite some time. We would gladly advise on modern music popular in queer community. Call us! You already know our telephone number!

The inscription on the picture says: “0 800 50 50 99 Hotline for LGBT. Social, legal, psychological support for LGBT people and their close ones. Seven days a week, 12.00 – 02.00 Free of charge from stationary and mobile phone numbers in Ukraine. The telephone helpline works under support of UPO “Gay Alliance Ukraine”. For more information please visit: https://upogau.org”.