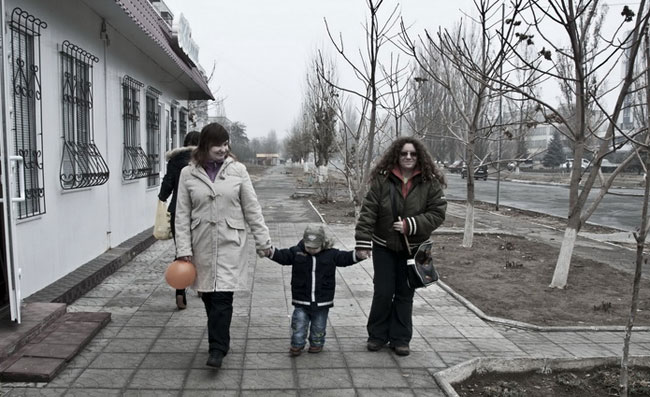 Another One (Insha)
Ukrainian news

Our colleagues from Kherson NGO “Another One” (Insha) together with NGO “Insight” held a roundtable on problems of queer families raising children.

An event called “Queer families with children: mobilization and the way out of the shadow” gathered LGBT-parents from Kherson, Kyiv, Melitopol, Kryvyi Rih and other cities from all over Ukraine. The participants of the roundtable discussed legal, psychological and social aspects of raising children in same-sex families and other unusual unions.
One of the hot topics was the situation with reproductive discrimination against transgender people. First of all, it came to the issue of the compulsory sterilization in order to change documents and the prohibition of child adoption by people who have gone through sex reassignment.

The lawyer of NGO “Insight” Olena Zatyrka spoke as an expert on legal issues. The psychologist of the charitable organization “Another One” (Insha) Olga Melnytska made presentations on her observations of the same sex families with children.

“Numerous foreign researches confirm that raising a child in a same-sex family is NOT a traumatic factor for psyche of the child. My experience of working with such children is another evidence to prove it. What is important is not the composition of the family, but rather an atmosphere within it. At the same time both children and their parents – lesbians, gays, transgender people – often have to face the pressure of the society. But these problems in most cases are also possible to get solved. Conservative people are usually more concerned with the question whether sexual orientation can be “transmitted” from parents to their children. Of course it is not. In practice, I was able to see it in practice working with a group of children from the same-sex families. Including older teenagers. And I see them as ordinary, active and cheerful children with understanding and caring parents”, – Olga told.

The practical result of the meeting was a resolution made in order to outline a number of problems faced by queer families with children, and to plan the first steps to solve them.
Kherson NGO “Another One” (Insha) was registered last year. Main objectives of its activities include protection of women's rights, protection of LGBT rights, fighting for gender equality. Among creative projects of “Another One” is issuing of the unique for Ukraine lesbian feminist magazine. Even before the official registration of the organization, its activists participated in conducting summer camp and training for the same-sex families with children.

According to “AntiMaidan”, Lyashko and Avakov are consultants at the LGBT Hotline