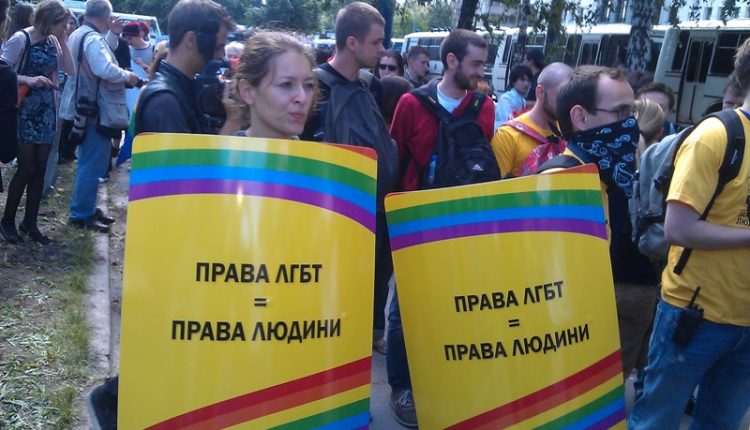 The inscription on the picture says: “LGBT rights = Human Rights”

Recently the Ministry of Justice released “final edition” of the National Strategy on Human Rights, which  still lacks any mention of LGBT. Human rights activists believe that hushing up the issues of discrimination and violence regarding one of the most vulnerable social groups in such important document is unacceptable.

“If we are really stepping up on the way of European integration, then Ukrainian authorities should make real steps towards modernization of the country and society. We insist that protection of human rights of LGBT people should become a separate paragraph of the National Strategy on Human Rights ”, — stated in released open letter of the Council of LGBT organizations of Ukraine to government representatives, mass media, Ukrainian and international human rights organizations.

“The new government, just like the former one, pretends that we do not exist, that there are no homophobia, discrimination and hate crimes against Ukrainian citizens – gays, lesbians, bisexuals and transgender people in the modern Ukrainian society”, — said in the appeal.

The covering letter to the text of the National Strategy on Human Rights signed by the First Deputy Minister of Justice of Ukraine Natalya Sevostyanova affirms that “suggestions and comments from the public that came to the Ministry of Justice were taken into consideration to the maximum extent possible when preparing the final draft edition of the National Strategy”. However this statement does not quite correspond to the reality since human right activists repeatedly pointed out the need to include LGBT issues in this document.
In particular, during committee hearings on the draft project of the National Strategy on Human Rights, which took place on 4th of March, such a need was urged by a wide range of organizations, including the Council of Europe, Amnesty International in Ukraine, “Center for Civil Liberties”, the International Women's Rights Center “La Strada Ukraine”, as well as the Council of LGBT organizations of Ukraine.

Later Mrs. Sevostyanova, who presented the draft project of the Strategy at the committee hearings, was personally handed a letter from the Council of LGBT organizations of Ukraine stating that the problems with human rights observance for LGBT people and the necessity to address them should become an integral part of the state strategy on human rights. But it also remained without attention.

The current edition of the National Strategy on Human Rights consist 27 strategic directions, including a paragraph on overcoming discrimination. However, neither sexual orientation nor gender identity are not mentioned in it.