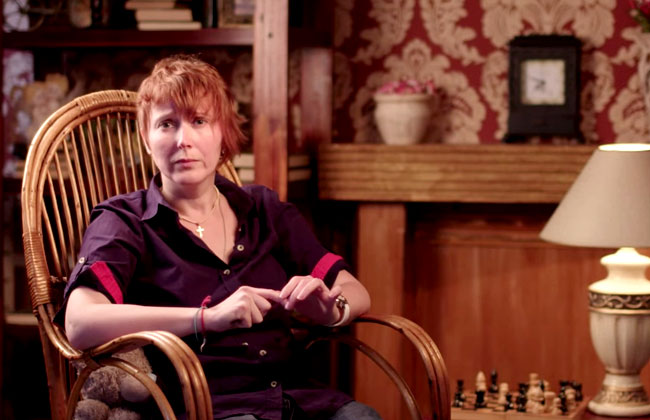 On Friday, June 26 at the discussion club of QueerHomeKyiv was held presentation and discussion of the videos made by the Kherson social theatre.

As we wrote before, in June the actors of the social theatres in Kyiv, Kherson, Odesa and Vinnytsia were filmed in video clips involving pressing social issues.
Specific feature of these video clips by social theatre from Kherson lies in the fact that they are made in the format of gender monologues. At the moment were produced three videos, ineach of them an actor telling the story of one real person. All the stories are based on actual events.

A young man invited a girl to the movies. On our way back we passed by his house, and a young man offered his date to call upon his house for a cup of coffee and to take a look at his work – since he is an artist. The girl hesitated, but then agreed. At first a young men indeed treated her with a cup of coffee, but then he raped her adding that she was supposed to know why the girls are being called for "coffee". She convinced herself that she was guilty, and never told anyone about the incident.

A young woman tells a story about her relationships with a man. At first she liked to please her beloved one with a dinner, to find and try new delicious recipes. Then it became so habitually for her boyfriend he completely stopped to be involved into the household. Breakfast, lunch, dinner, laundry, cleaning … and all of it was combined with a full time job. So is that the notorious "woman's happiness"?

Homophobic person is looking for a victim, coldly and hard-headedly. Having recognized a gay person in a passer-by, he haunts him down and beat him up. Unpunishably. Later he came across another gay, and everything ended up with beating him up, which resulted in severe fractures. And once again, unpunishably. Another time this homophobe went too far and, not having paced himself, killed his victim. Meeting no resistance, unpunishably, he conceives a planned murder. He found a victim, committed crime and… police let him go. Eventually the criminal lost his mind: "fighting against homosexuals" bought him to the point when everyone around were seen as gay people to him. Except for himself.

Videos left no one indifferent. At the presentation of the video clips were present guests from Kyrgyzstan and Tajikistan, who were actively involved into discussion after watching the clips and talked about the situation of women in their countries, discrimination and violation of human rights.

Text about raping was read by the actress of the gender theater. Young woman herself up to this point had not told anyone about what happened. After she had heard her story told by another person a young woman decided that now she probably would by able to voice it herself.

The story of homophobe was written and read by a dramatist Yevgenii Morkovskyi. The plot is based not on a specific person, but rather makes collective portrait created from the real stories of homophobic people.

The life story of a woman trapped in "a household slavery" was also voiced not by the author, but by another project participant.

To watch video clips of the social theaters you may at the YouTube-channel of UPO "Gay Alliance Ukraine".