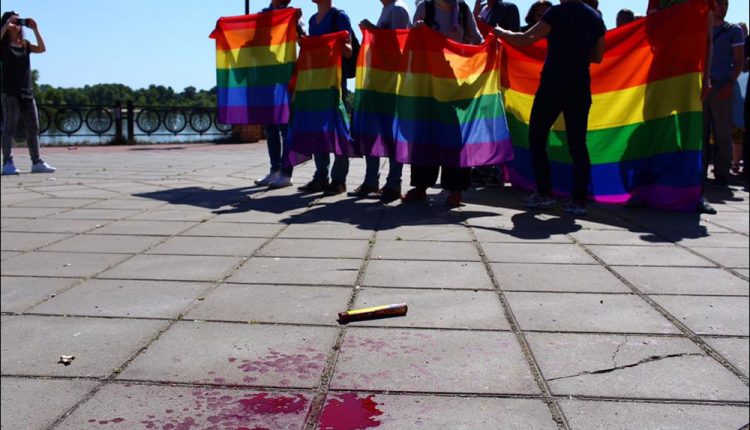 After the Equality March was held within KyivPride2015, many people sighed with relief. Finally it happened! At last something has started to change in this country.

In the nearest future may appear yet another reason for joy: there are real chances of adopting legislation prohibiting discrimination based on sexual orientation in the labor sphere.

If you look at it from the side – it seems to be going in the right direction: freedom of peaceful assembly of LGBT more or less has become ensured, the legislation seems to allow protection if someone would think of getting you out of your work place because of your sexual orientation.

Of course, all of these are the right steps to take. Except that we should not deceive ourselves. Both changes in the legislation and protection of the Equality March in Kyiv were conducted in the first place in order to create a picture, to ensure external "window dressing" of the fulfillment of obligations, which Ukraine took over within the process of European integration. Although, by and large, neither governmental organizations, nor NGOs have understanding of the actual value of the human rights. Not all even progressive MPs are aware of the fact whether we have general anti-discrimination legislation at all. It is wonderfully reflected in the video, on which works the Coalition for Combating Discrimination in Ukraine (CCD) in the framework of their campaign.

The authorities never set a goal to make internal changes in the context of improving the quality of life for vulnerable groups. Now they want only to make light cosmetic repairs to get the long-awaited visa liberalization, play a trump of their achievements for their voters and ensure their support for re-election at the next cadence.

In other words we should not cherish hopes that Ukrainian government resolutely took on "liberalization of the reality" and improving the quality of life for the ordinary citizens – in the best scenario we can expect such a understandable and familiar for our country mode as "swamp" mode. It seems like something is being done, but in a very "special way". Meanwhile the ordinary people do not feel any changes. Facade, a picture, beautiful speeches for the external observer. But inside everything is still rotten.

Those changes, which could actually make impact on the lives of gays and lesbians, seem quite illusory in this country. Of course, everything will be achieved through evolution, gradually. Swoops can change nothing in here. But in order to reach something we should see our final goal. For our state this final goal can be visa-free regime and the prospect of EU membership. And that's it!

Improving the quality of life for marginalized social groups is not important for our state. It has no interest in ensuring marriage equality – after all Europe does not require it!  Elimination of discrimination based on gender identity is not important: why to include this point in the draft of the Labour Code when just mentioning of sexual orientation is enough for Europe? It is not important together with the organizers to provide security of the Pride in open format in the city center – after all it's possible to drive out the activists in some hole on the outskirts, walk them there for about forty minutes, and then report back of ensuring the rights of citizens to peaceful assembly. The authorities do not have to conduct any preventive activities against far-right extremism if they could simply arrest skinheads who attacked another action and hold them behind bars just for a month for "hooliganism".

Attacks on gay clubs continue, activists are being tracked down and this information are being fearlessly posted on the open internet-platforms, gay men are being beaten, blackmailed, fired from their jobs, refused to rent a house and to provide adequate legal assistance just because of their sexual orientation. And there is no special ray of light in this total darkness – because no one cares in this state about the essence of the problem. And frankly speaking nobody would start dealing with this issue right now. Because real improvement of the quality of life for citizens is not an easy path to step on. Why for? If it is possible to confine ourselves with the cancellation of visas – then let everyone be happy.