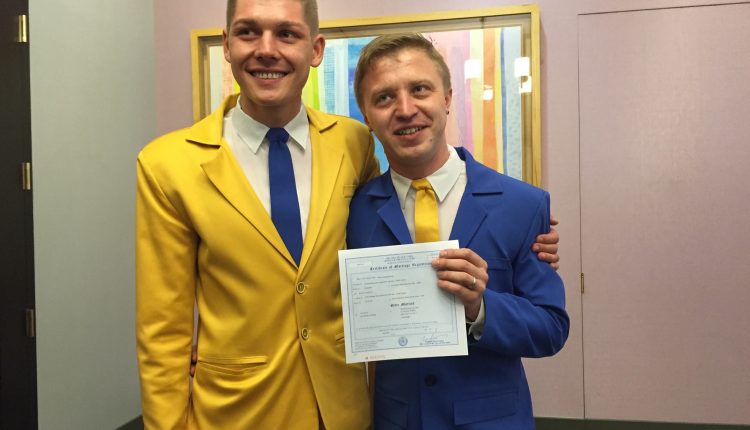 On 1st of July in New York the head of "Gay Alliance Ukraine" Taras Karasiichuk and his life partner Nikolai Maslov, who is also an employee of the organization, got married.

"The very fact that our marriage would be valid in two dozen of countries around the world for us as for people cosmopolitan to the backbone already means a lot. Besides, we hope that someday our state would recognize at least, as e.g. in Israel, однополые браки, same-sex marriages concluded abroad", – said the newlyweds.

According to the young couple, the ceremony itself is a very simple and good-organized procedure. "Here nobody even uses the phrase gay-marriage, they simply say marriage. Here it is not relevant to make a distinction between heterosexual and homosexual weddings couples, – told us Nick. – Everyone was very welcoming and friendly. Not only the employees of the marriage office, but also other betrothed came up and congratulated us, noting the creativity of our suits".

Wedding suits of the couple really deserve special attention. The thing is that the guys wore the colors of Ukrainian flag: the one was in a yellow suit and blue tie, and the other, on the contrary, – in a blue suit and yellow tie.

"With our suits we decided to show that we are actually those notorious "gay-bandera" people of whom Russian propaganda keeps telling so much about and that we actually do exist. Moreover, the suits were sewn by tailor of separatist sentiment from Odessa, who flatly criticized our idea calling it "sharovarschina" [T.N. – low-grade mockery illumination of Ukrainian culture; in its form similar to Ukrainian national trousers – sharovary, but alien by spirit; it's the cultural phenomenon that mimics the spirit of the culture]. Thus, to the last moment we were not sure if we could count on him. We received our order right before the departure. In a way we've got them through suffering", – shares Taras.

Maria Kozlovskaia, a lawyer and a leading activist of the Russian LGBT Network, acted as a witness in marriage. "I am very proud of this fact. On patriotic gay-bandera wedding the witness was the Russian woman", – laughs human rights activist. 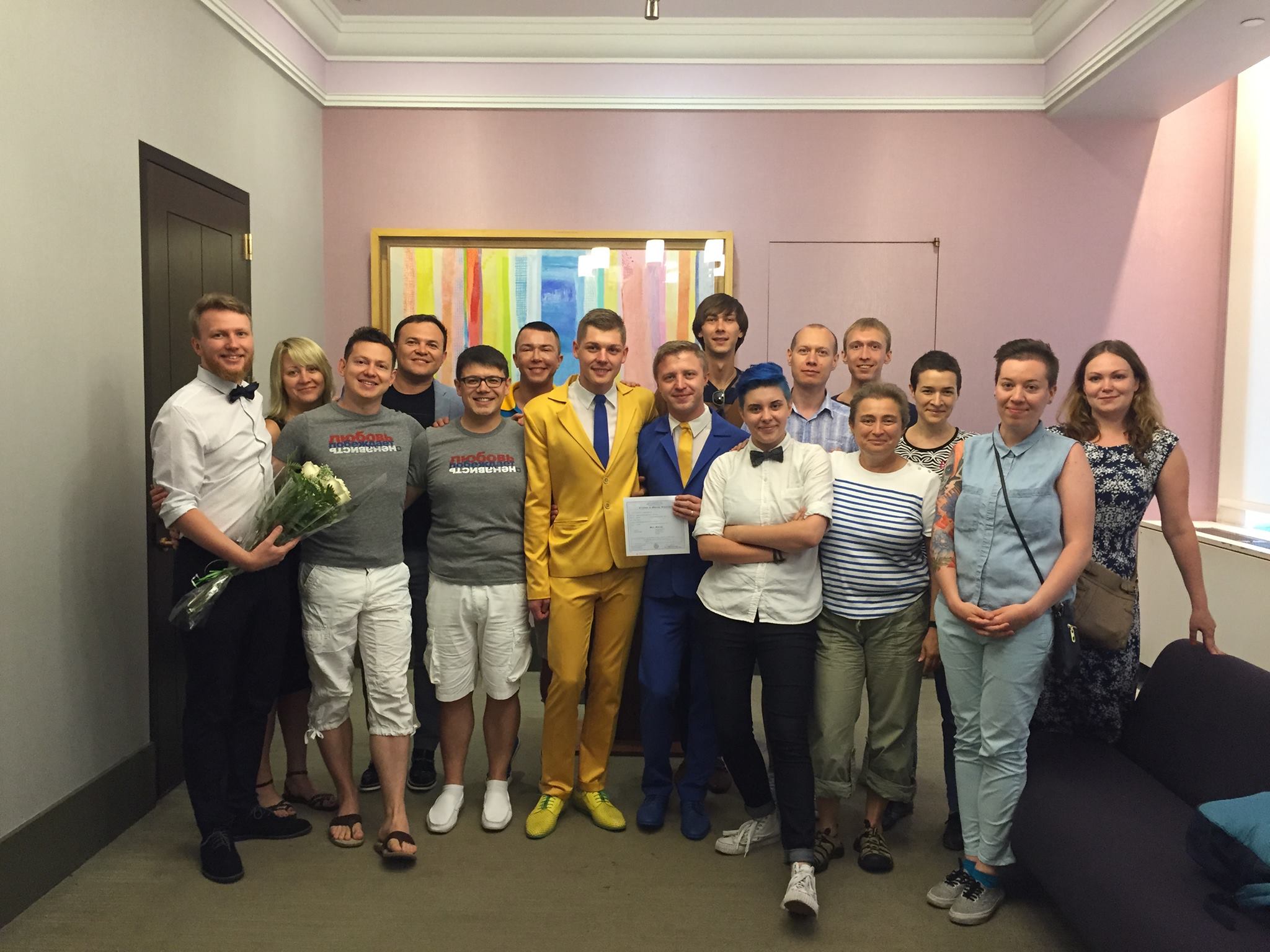 According to both spouses, for them it was very important and symbolic that their wedding took place right after the legalization of same-sex marriage throughout the United States. "New York is our beloved city. It was very honorable for us to register our marriage at the Manhattan marriage office. In addition, it is much easier to arrange than, for example, in Canada or Argentina. And much cheaper, which is very important. Besides, here we've got a lot of friends from RUSA LGBT, who helped us so such in organizing the event. We do not feel like strangers in here", – they admit.

Taras believes that it is too early to talk about the prospects of marriage equality in Ukraine. However, the activist reassured that in the nearest future UPO "Gay Alliance Ukraine" intends to develop a plan of a long-term strategy to achieve marriage equality in the country. "If everything's gonna be alright and Ukraine would not rush towards right-wing ideology (to what unfortunately there are already some preconditions), then I think in 8-10 years, the recognition of same-sex marriages would be possible. Certainly, only provided consolidated efforts on the part of the LGBT community and the human rights movement", – believes Karasiichuk.
The couple does not plan any specific honeymoon: "So far we continue to enjoy New York City and later we leave for Washington. Our honeymoon we'll have traveling around America".
Related materials: "The most important thing for me that he is happy". Mother of LGBT activist about her son

Deputy political commissar of “DPR” – “to kill everyone involved”