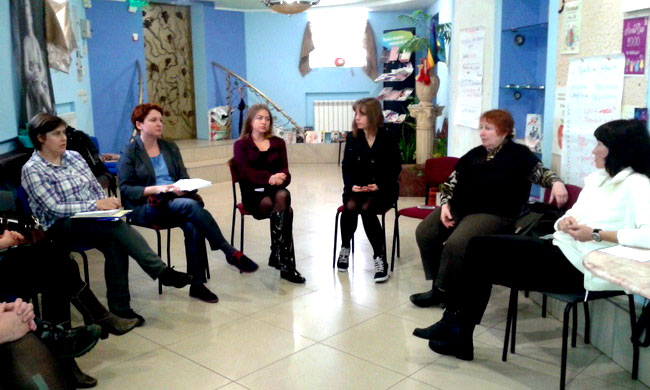 Anna Sharygina, the coordinator of Queer Home Kharkiv and vice president of Sphere Women Association, was talking about the problems that didn’t let LGBT people go to a psychologist. The attempts of «healing», fear of disapproval and awkward questions about homosexuality are among them. For example, they may be asked how long ago did they acknowledge they were homosexual (the question that heterosexual people are never asked) or «who is a man and who is a woman in your couple?» And, of course, the classical question «Maybe you just hasn’t met a proper partner yet?»

Kateryna Shutaliova, crisis counsellor and psychotherapeutist of QueerHomeKharkiv, was talking about the problems that her LGBT clients most often come with and also about their peculiar solutions. She as well brought up the issue of homophobic discourse in psychology taking one of the last issues of Psychology For All popular magazine as the example.

Olga Kadysheva, the head of Human Home charity foundation, offered to consider the troubles distinctive for LGBT from different angles. It is a question of double emotional pressure that people face when they acknowledge their homosexuality and of absence of «social registration» that is of invisibility of LGBTG problems in society.

The representatives of some UN programs participated in the discussion alongside with psychologists and initiated the discussion of possible ways of changing that homophobic attitude that ruled in Ukrainian society.

So the participants of the roundtable discussion got some new knowledge as well as chance to participate in planning the development of psychological culture and raising tolerance to LGBT community.