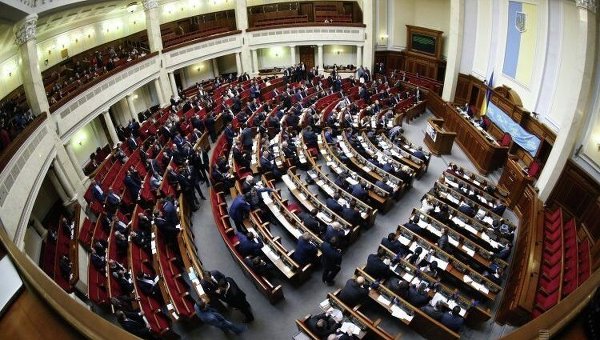 Verkhovna Rada of Ukraine voted against introducing sexual orientation to the list of  article of new Labour code that went through in the first reading on November 5.

Inclusion of sexual orientation to the list of issues that make discrimination illegal was put to a separate vote during the preparation for the second reading. 117 MPs voted for it, 45 MPs voted against it and the others did not vote or abstained.

Let’s recall that introducing SOGI (sexual orientation and gender identity) to the article of the Labour code was one of the EU demands for implementation of regime and the obligation that Ukraine assumed in frames of the program of association with EU.

Iryna Geraschenko, the head of subcommittee on information support of the integration process of theCommittee of the Verkhovna Rada of Ukraine on Issues of European Integrationcalled this vote the Sabbath of obscurants and 70% of MPs — «mental Azirovs» (Mykola Azarov, sarcastically called «Azirov» because of his poor knowledge of Ukrainian, was the prime minister of Ukraine famous for his narrow mindedness) on her Facebook page.

«Today the Parliament of Ukraine as a European country had to comply with its COMMITMENT regarding and to support the European norm of no discrimination being possible in employment, including that on the grounds of gender identity or sexual orientation. But the real Sabbath of obscurants started instead," writes Iryna Geraschenko.

«Ourkeyvalueisrespectforperson’sidentity. Respect! Forvariety! And there’s no need to meddle with the private lives of the others." Also she stated her disappointment with the behavior of her parliamentary colleagues and underlined that such vote was a serious blow to Ukraine’s chances to get regime.

Let’srecall that during briefing in Kyiv that took place in Kyiv on October 20, Minister of Internal Affairs of Ukraine Pavlo Klimkin said: «We consider several options for overcoming the discrimination [on the grounds of sexual orientation] in the frame of dialogue with the European commission. It can possibly include changing the legislation and implementing corresponding judicial practice, as our Constitution contains provisions about such discrimination being impossible. The Parliament is to decide either this judicial practice will be improved or some changes will be implemented in the corresponding legislation, for example in the Labour Code. The dialogue continues.»

Halloween in Queer Homes. They had a hell of a good time there!