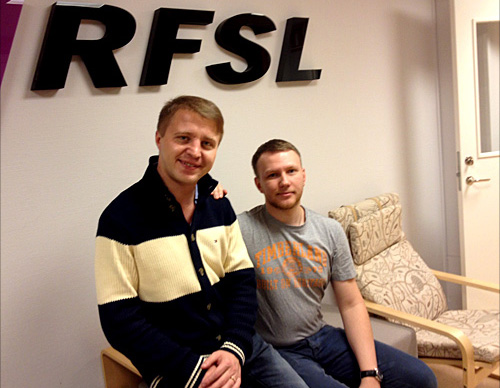 Results of visit of Gay Alliance Ukraine representatives to Sweden

Last month in the frame of international cooperation development representatives of UPO "Gay Alliance Ukraine" Taras Karasiichuk and Volodymyr Naumenko visited Stockholm, where conducted several working meetings with the leaders of RFSL (The Swedish Federation for Lesbian, Gay, Bisexual and Transgender Rights) and RFSU (The Swedish Association for Sexuality Education). One of the participants of these conversations was the president of RFSL Ulrika Westerlund. The format involved discussions on the Ukrainian situation and receiving expert recommendations on the development opportunities for our organization.

Besides, UPO "Gay Alliance Ukraine" representatives had a meeting with a member of the Riksdag (the Parliament of Sweden) – Hans Linde. The next stage of the visit was the workshop for representatives of LGBT organizations – partners of the Swedish International Development Cooperation Agency (SIDA) in the Eastern Partnership countries. The workshop was attended by delegates from Belarus, Moldova, Ukraine, Georgia, Armenia and Azerbaijan. At the workshop, called "Sexual human rights in the countries of the Eastern Partnership: Challenges and Opportunities", plans for cooperation of participating organizations and coordination of activities at the regional level were discussed. The main goal of cooperation between Sweden and these countries is strengthening of democracy, justice and sustainable development and progress towards the European Union and its values.

According to Taras Karasiichuk, President of UPO "Gay Alliance Ukraine", Sweden could play a key role on the international stage to strengthen the human rights of LGBT people. "As for Ukraine, at the moment only an international pressure can force the political elite discuss LGBT issues – he believes. – Because of the ignorance and conservatism of our politicians they try to avoid the topic. They are afraid to loose the support of their homophobic voters. On the other hand, nowadays there is no need to prove that many Ukrainians tend to be closer to EU. Most of them support the Ukrainian Euro integration, not the least because of the rapprochement with Russia that threatens their interests, including economical".

In addition, within the visit a meeting with representatives of the Department for Eastern Europe and Central Asia, Ministry for Foreign Affairs of Sweden took place.

There was no way round without entertainment program: meeting participants visited the museum of the famous Swedish group ABBA.