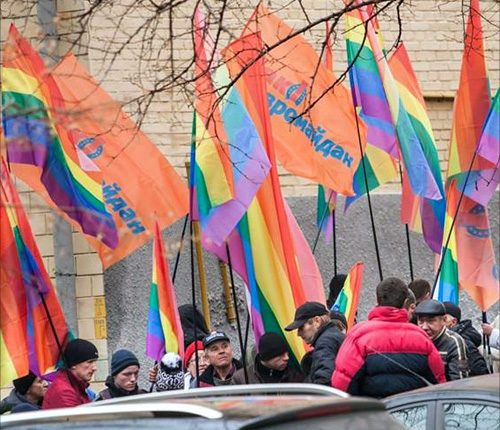 As expected, news websites and other sources – even those you don't consider to belong to so-called yellow press – vied in claiming that "LGBT-community representatives took an active part in the march for European integration in Kyiv".

Reporters of "Izvestia" called "community representatives" those "several dozens of people with rainbow flags, who moved as part of the march near Shevchenko Park". Most likely that none of that reporters who captured this provocation, had even a tiny thought of weirdness of a combination of rainbow flags with orange flags containing motto "Yes! EuroMaidan!" symbolically rendered to the brand mark of ex-President Yushchenko's political party. They were not even confused by the fact that so-called "LGBT-community representatives" bore little resemblance to the European Gay-Pride participants, whose vivid images are usually used by national homophobes to frighten our citizens. On the contrary, they looked like crumpled representatives of lumpenproletariat at rather average age. In this regard we feel very sorry for the reporters for two probable reasons: either they completely lack the ability to analyze, or they deliberately expose the situation in a distorted manner for the sake of sensational materials, which questions their professionalism. UPO "Gay Alliance Ukraine" once again appeals to all the readers of our web portal, reminding, that Ukrainian LGBT-community is not planning any actions under rainbow flags in connection to the Vilnius Summit. Ukrainian gays and lesbians go out to EuroMaidan indeed, but without any rainbow symbols, since they believe: the only symbols to be presented there today have to be flags of Ukraine and the EU. All so-called "EuroMaidan participants", posing themselves as organized gay-groups, are in fact provokers, or extras paid by provokers. The only goal they pursue is to frighten off supporters of European integration and make them change their minds, persuading the conservative Ukrainians that in case of signing the Association Agreement they will face "Euro Sodom" and immediate legalization of gay marriages.

On November 24, the day when the forces of opposition announced the People's Assembly ("Veche"), which became a response to the Cabinet of Ministers decision to suspend preparations for signing of the Association Agreement, "the Parent Committee of Ukraine" held its own demonstration in the capital's city center.

Public organization, which invested heavily in theatrical performances under embassies of EU countries and even wasn't too lazy to bring to Kyiv foreign homophobes to speak up of the "horrors of Gayrope", still hasn't folded its operations. "The Parent Committee" held its another action on Sophia`s Square, attended by very few people, around 30. Many of them had a little resemblance to the image of exemplary Ukrainian parent. The participants of this demonstration reeled near Bohdan Khmelnytsky monument laboriously, but rather sadly, listening to commands of their boss Alexander Skvortsov, who cheerfully broadcasted into the microphone more or less the following: "Come on, let's dance a bit more, do not forget about the reel! We'll leave really soon!". In our attempts to figure out the goal of its alternative EuroMaidan gathering, they either looked away and turned back, unwilling to communicate, or vaguely mumbled learned phrases like "we are against euro-gay-integration". Results of visit of Gay Alliance Ukraine representatives to Sweden