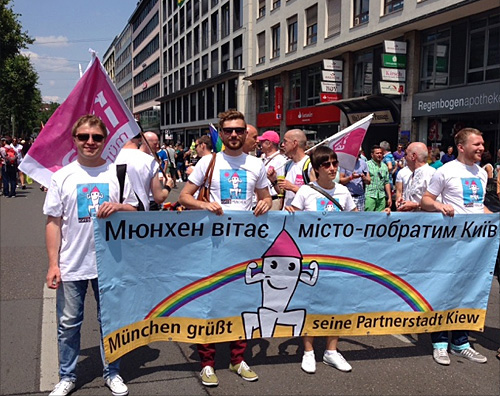 An interview with President of UPO "Gay Alliance Ukraine" Taras Karasiichuk: on Ukrainian LGBT-movement, new leaders, coming out and whether Association with EU is going to help the national gay-community.

– In the light of what we were talking: do you see any perspectives on how to speed up the processes related to gay-movement? Especially on background of our European integration, at least, declared by the authorities?

Taras Karasiichuk: Here is what I'm thinking about: even if someday we become the members of EU, Europe itself won't help us with anything. Certainly it will create some legislative opportunities to provide, for instance, strategic legal proceedings. But Europe won't deal with the quality human rights violations monitoring, legal proceedings, – this should be done by the third sector. One more problem we face is that usually we work on the process rather than on the final result. There are two management models. The first model – when management oriented on the process: we assume that taking some movements we someday will get the result. But there is another approach, initially based on obtaining the result. We define clear and precise borders for a short period of time – and within these borders we must achieve clear, concise goals. That's why UPO "Gay Alliance Ukraine" – is such organization, that in its activities is oriented on the result. On the quality of the published materials, on coverage of web-portal, on quality and quantity of conducted informational campaigns, on quantity of particular people, who received help. Because sometimes it seems that gay activists are mired in endless round tables and various working meetings. The latest trend of the year – even not a year, but several years – it is the process of co-called consolidation the efforts, creation of structures that would help, bring us together to achieve something greater.

– You just said the phrase – and I'm trying to comprehend what it was about.

Karasiichuk: It is about the establishment of a variety of coalitions, collaboration agreements, on partnership and etc. This is all good, but in Ukraine as usual everything goes not the way we would like to. Why do we need these partnerships for? We need partnerships for the specific project, for something. We need associations and coalitions for something.

–  First of all for joint work on this something.

Karasiichuk: And the word "work" here is the key word. But when there is an association just for the sake of an association, partnership for partnership … Because it has to be that way, because it is nice, because someone has decided so – supposedly, it would be nice for Ukrainian LGBT-movement to have one common umbrella organization – however, it is unclear for what purposes… And we started to do it with the hope that, perhaps, something would come out of it. But I think that we already have too little resources to spend them on something that won't lead us to the final goal and that is being just unthoughtful. I'm not sure that all the actors of the Ukrainian LGBT-movement will say that they need the umbrella organization that would implement specific projects, because it will go into direct competition with the activities of each organization working in this field. Do we need an association to coordinate positions and make strategic planning? Sure – yes, we do, but why do we need to create an artificial structure, when we simple can arrange a conference and make this planning? There is another question: who will implement everything we would have planned? In this case this unifying structure itself looks like an artificial intermediate link.

– And here we return to what we have already talked about: the bureaucracy begins, the work with wastepaper – everyone gathered together, talked, drew up the protocol, reported, and that's it. And the access to gay-community in the wide sense of it has been closed.

Karasiichuk: Yes. Because if UPO "Gay Alliance Ukraine" has a need to implement a joint project with the regional partners, then we cooperate, communicate. We have a number of partners and a number of friendly organizations. We contact them and unite to solve a particular problem. And the very essence of association for the sake of association is not clear to me.

– Let us return to the issue of Europe. You started talking about the fact that we shouldn't deceive ourselves regarding our potential association with EU. It can help us somehow, including legislatively, but only at the level of "kick in the pants", that may give us a boost.

Karasiichuk: (laughs) Only from this point of view. Because legislator can not propose draft laws affecting LGBT issues without involvement of LGBT community members.

– You have to provide the legislator with idea on a silver platter and ideally he has to draw it into a bill and provide its lobby.

Karasiichuk: Exactly. Once again let us turn to the example of Europe and USA. Community should go to demonstrations, to prides; community should be active. Because the state reacts on the needs of society. But nothing will happen unless community speaks clearly and explicitly that they do exist and what they really need from the government. Europe can just create opportunities; provide mechanisms that can be used in advocacy and lobby. There are values in Europe we aspire, but they will remain external values to us as long as same public organizations together with the state conduct informational campaign for Ukrainians on what these values are really about. Nothing happens just like that, we need to work here, and, in any case – regardless of whether we sign association with EU, or not. It's just – two parallel, independent processes. The signing of the Association Agreement is the process of high political level that we may influence only indirectly. And we conduct such a work: correspondence, meetings etc.

Karasiichuk: With EU representatives, with authorities. There is another, absolutely independent process. It is development of LGBT-movement based on the community. Movement that is ready to talk openly about their rights and articulate their own demands. Because it won't happen in any other way: Europe itself will not forcibly impose foreign legislation on Ukraine.

– Representatives of the gay-movement, in particular, UPO "Gay Alliance Ukraine", communicate with European politicians. Is it possible in principle to communicate with Ukrainian politicians – at that level where they are right now? And in the light of what we observe in relation to antidiscrimination law?

Karasiichuk: A politician will do something only if they are convinced that it will not harm their next election campaign. Politicians will start to talk to us more productive only when they see the actual citizens of Ukraine, who consider gender issues as a priority. As long as some party recognizes that they have actual voters they can rely on – liberal voters – nobody will raise these issues. Politics is a reflection of the current state of affairs in society. And the main task of the LGBT-movement now is to be successful in the political negotiations. We have to conduct sociological researches, informational campaigns, we have to explain. After conducting 2-3 sociological researches we could prove that the number of people supporting LGBT more than it seems to be. Especially if the issue will be put on the priority list of human rights during the elections. I am sure that after that we will have political forces and figures that will focus on those 10, 15, 20 percent. The situation is not so bad after all.

– I consider it to be a bad situation when there are only 15% of liberals in the country. And even these 15% are not visible at all.

Karasiichuk: Exactly: if we showed them, then there would be the political forces that would deal with the representing the interests of those 15 percent of the population in the parliament. Political technologists of our government leaders are paid in vain, because in current conditions in Ukraine some party could find out long time ago about these 10-15% of liberal citizens and gain their sympathy. And on this wave get to parliament. How does the situation look like on this stage? Oh, everything's bad! Our society is extremely homophobic, everyone's strongly against same-sex marriage, adoption of children by same-sex couples – is a scary horror. And no reasonable politician observing such a picture will make any public step towards LGBT rights, because for them such a step would mean – as it seems – the political death. And nobody is trying to prove that situation in our country is slightly different.

And one more problem of our LGBT-movement. Instead of being proactive and conveying the message to general population, we react on our opponents and barking at them. Instead of following the principle "the moon does not heed the barking of dogs", to do our work, we constantly we are trying to compete with our opponents in speech craft. But they are not our target group. Generally speaking, it is quite foolish to spend time, resources and nerves on them. We have to work with those people who are potentially capable of thinking, with those who haven't decided yet. Because the leaders of our homophobic organizations – it is only contractors who, for ideological or financial reasons, performs tasks given to them. And perform well – much better and more efficient than the LGBT community. It is wrong to concentrate on how to convince them otherwise. But we can follow their example, because they go out to people, distributing leaflets, meeting people, collecting signatures, acting competently enough.

– And by the way, according to the American model: walking from door to door.

Karasiichuk: Exactly! They collected 100,000 signatures and waving them as their evidence: behold, 100,000 people are totally against anything related to LGBT people! Naturally any reasonable politician will be guided by their voters, these 100,000. And those deflections that are now observed for Europe from our government – a temporary phenomenon. They will not cross the border and lives of the common gay people won't get better just from declarations of EU integration.  A specific government social program has to work, because the adoption of a single anti-discrimination law, if it still will ever be adopted – is nothing to us.

Karasiichuk: Yes. We have to work and the state have to work taking into consideration in their programmes LGBT people as the common citizens of Ukraine.

Taras Karasiichuk: There are people in the gay-community in Ukraine who are ready for coming out