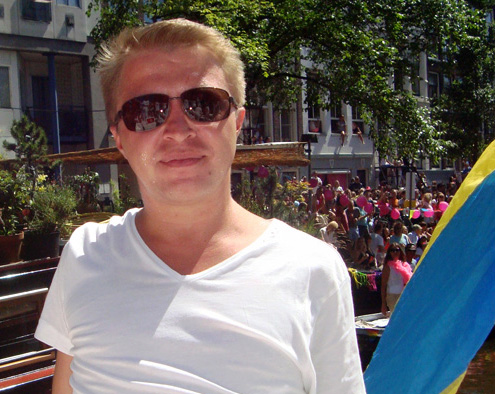 Taras Karasiichuk: There are people in the gay-community in Ukraine who are ready for coming out

Аn interview with President of UPO "Gay Alliance Ukraine" Taras Karasiichuk: on Ukrainian LGBT-movement, new leaders, coming out and whether Association with EU is going to help the national gay-community.

– Taras, let's start with your vision of LGBT-movement in today's Ukraine.

Taras Karasiichuk: This is a very difficult question. We should start with a definition of LGBT-movement. If we consider it as a movement, that is primarily based on an active community, as for instance in Western Europe, or USA, and as an initiative of the ordinary community members, seeking to achieve rights, then Ukrainian LGBT-movement looks very sad on this background.

– Don't you think that Ukrainian LGBT-movement has the other way around?

Karasiichuk: Yes, for Ukrainian LGBT-movement an initiative pushed down from the top – not from the community representatives, but from the organizations, currently over 40 of them in our country. The most of these organizations emerged particularly thank to a sort of lobbying by international funds and big international institutions.

– Are you talking about human rights institutions?

Karasiichuk: Not, not about those. For example, many organizations in Ukraine were created on a wave of starting the programmes of The Global Fund to Fight AIDS, Tuberculosis and Malaria.

– Do you mean it wasn't much of a gay-movement, but more of HIV-service?

Karasiichuk: To a large extent it was HIV-service: a model of organizations that were created in Ukraine was oriented on the work as a contractor to perform certain services for certain money. At the time there were basically no organizations that worked in the field of HIV prevention – I mean officially registered organizations, not simply legalized by notification. Therefore, almost all the organizations that appeared at that time were in one way or another connected to HIV prevention projects. Their specifics itself implies not so much of a structure based on the community, but more of a structure that meets the requirements of a good contractor. What does such a contractor need? They need a good accountant and a good document controller in order to report on the work done quickly and accurately at the right time. And if necessary, in case of international guests visit, to show a nice picture. And one more thing: the specific feature of our HIV prevention projects is that we pursue quantity. To fulfill five-year plan in three years, then we face new challenges…

– Just as Stakhanovites did?

Karasiichuk: Yes. We are being asserted with new estimated number of MSM we have to reach, new percentages, developed and calculated by smart men and women, which implies that if we cover certain percentage of the target group, then in such a way we would influence the epidemic.

– But now we are talking about the LGBT-movement, and MSM – is a little bit different. HIV-service is very important and needed work, but it is not gay-movement.

Karasiichuk: If to speak about the LGBT-movement, separate from HIV-services, it is in rudimentary stage in Ukraine. I am in no way would claim that we are "spoiled" by HIV-service; it is just that a large number of the movement leaders are currently being slightly wallowed in it. I know people who devote their lives to paperwork, although they came to LGBT-movement with completely different motives. But eventually they faced the fact that they had to be engaged in the processing of waste paper, endless reports and upholding of databases. They are in a permanent stress due to incorrectly completed clients questionnaires, or other unimportant things, which is more typical for the chancellery and bureaucracy, rather than for the LGBT-movement. Some activists were simply lost in all of it.

– In other words they came, figuratively speaking, with burning hearts, sought to obtain human rights, and as a result got stuck in bureaucracy – and this is no longer LGBT-movement. This is basically a contractor activity in the certain area: HIV-service linked to medicine, to decreasing the level of HIV-infection, but it is not really that. Naturally, HIV-service and gay-movement are connected, but a legal movement of which we speak is being in its embryo stage. Despite the fact that Ukraine gained independence 20 years ago. How do you think, why during these 20 years very few leaders devoted themselves to LGBT-movement in the context of human rights protection, advocacy?

Karasiichuk: At this stage – and it is very pleasing – comes the understanding of the need to separate LGBT-movement from HIV-service; the understanding that they are two completely different things. Some organizations are deliberately taking a course precisely to movement in a sense we are talking about. They refuse to be contractors gradually, since not every organization can afford it regarding the financial support. Speaking of UPO "Gay Alliance Ukraine" we have the following situation: we do not refuse to provide HIV-service, but we transfer it to the separate department, which engaged only in its activities. And each of us understands clearly who deals with the medicine-related issues, and who – the human rights protection and advocacy issues. Quite a widespread example: our friendly organization RFSL from Sweden does exactly the same, they have both health-related projects for MSM and human rights related projects. In our work we are in many ways oriented on them.

– Doing both, but clearly separating the directions of work?

Karasiichuk: Not only separating, but also understanding what each of us is doing, and why. We know very well what is advocacy of HIV/AIDS prevention about, as well as advocacy related to HIV-positive MSM and improving their situation, or improving the national programme to fight HIV/AIDS. However all of it has only indirect relation to advocacy of LGBT rights in general. It is very important for gay-activists to realize it and avoid exposing themselves to potential burnout effect. Especially considering the fact that one of the main problems of Ukrainian LGBT-movement is the lack of human resources, lack of leaders.

– Just recently we talked on this topic with guys, who came to Kyiv from different parts of Ukraine to participate in training. How do you see the solution to this problem as a person devoted to LGBT-movement for many years now?

Karasiichuk: First of all, we need to preserve and cherish our current activists. Quite recently we discussed this issue with colleagues from the Russian LGBT Network – it will be at the center of our joint project, which we are planning at the moment. This includes removal of psychological stress, training activists in skills on how to correctly response to stressful situations. This is crucial, because if hardened wolves would leave – and this process has already started, – the connection between generating might get lost along with the enormous experience accumulated over many years and that would be very bad. Another important point – the so-called outreach. We need to start going out in public.

– Since we're talking about outreach – could you please explain this term for us, because I realized that many people did not understand, or misunderstand the concept.

Karasiichuk: Outreach – is an exit directly to the target group. If it happened in such a strange way that here in Ukraine in LGBT-movement at first we had organizations and leaders and only afterwards community started to consolidate around them, then the situation has to be changed. And outreach can help here significantly. For community to really become a community it is crucial to see and to know what are the needs of people and try to implement these needs. They should be interested, engaged into the movement; identify potential leaders and help them to open up. This is the only way to maintain Ukrainian gay-movement.

– The main question that always appears in such situations: how to do it? Outline at least prospects. Because we have a vicious circle precisely due to the fact that Ukrainian gay people – common, ordinary gays, lesbians, bisexuals and transgender people – are afraid to get seen, to come out, to tell something about themselves, to defend their rights. Not only at the national level, but even within their own families.

Karasiichuk: There is a part of community ready for coming out. The number of people coming out is quite big now.

Karasiichuk: Only thanks to the personal contacts. Ordinary gays, lesbians, bisexuals and transgender people have to understand what the LGBT-movement is, and, what is more important, why they personally need it. In order to do it we have to explain, to show, and not only show, but as well to offer something really interesting. Because if we try to offer some poor set of boring discussion clubs, or movie shows, attended by two-and-a-half viewer, only for the reason that we believe that this is what LGBT-movement needs, we won't succeed. We will remain in different dimensions.

– So, first of all we need to establish feedback.

Karasiichuk: To establish feedback and to address the needs. And not just fulfill expectations and vision of donors who are somewhere far away with their expert assessments … No, I do not doubt that these assessments can often be interesting and informative, but sometimes it happens and it's absolutely useless intervention, which, on the whole, is not effective.

– And because donors often happen to be foreigners, they do not always realize local context.

Karasiichuk: That's why you have to explain to donors, to be more proactive telling them what we really need.

– Speaking of donors. It is inappropriate to compare us to America and Europe, but still let us try to draw parallels. LGBT-organizations there exist by means of internal donors, internal donations. Here in Ukraine is it really possible – to be financially supported as gay-organization by Ukrainians themselves? Even in the perspective? Or such perspectives so distant that we shouldn't even talk about them?

Karasiichuk: Shouldn't even talk. Almost the entire third sector in Ukraine exists due to support of external donors.

– I am interested in this question for the following reason. I can often see how Americans doing their fundraising not only among the wealthy people or companies that support LGBT interests – we don't have even to talk about it here – but also among ordinary citizens who are willing to donate a dollar or five dollars. And the result is just as in a well-known saying that "every little helps" because there are a lot of such ordinary citizens.

Karasiichuk: It might be an interesting experiment here. I believe that if we were better understood by the ordinary gay people, if they knew what we do, why we do it and what particular help they can get from our work, then people would help us.