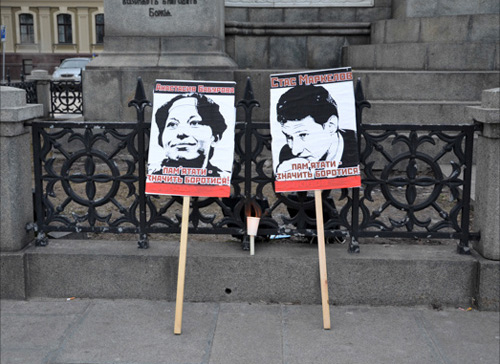 Last Sunday Volodymyr Naumenko, a representative of UPO "Gay Alliance Ukraine", made a speech during the action in memory of lawyer and human rights defender Stanislav Markelov and journalist Anastasia Baburova. The action took place on Mykhailivska Square in Kyiv and gathered around two hundred activists.

On January 19, 2009 Markelov and Baburova were shot dead in Moscow city center. The murders are directly associated with their human rights activities, in particular, with numerous articles by Anastasia on nazism and high-profile cases in which Stanislav was the leading lawyer. Stas was largely known among activists in Ukraine, while Nastia was from Sevastopil. This tragedy became a symbol of the dangers of political terror by those who consider violence the primary method of realization of their misanthropic ideas. The action was attended mainly by young people who held banners with such slogans as "To remember means to fight!", "We are against political terror!", "Human being above everything!".

It is remarkable that the protesters represented various movements and the mass media expressed a great attention to the event. On Sunday, those who gathered at Mykhailivska chanted slogans for equality, solidarity, counteract discrimination based on any grounds and eventually – for human rights. To the square came representatives of different forces that were joined by the common idea opposing renewed fascism and calling upon deliverance from the cancer of the police state. For last months the present authorities of Ukraine has demonstrated aspiration toward authoritarian rule – the degree of its contempt for fundamental human rights and freedoms became more obvious. People faced irresponsibility and arbitrariness in using violence by state authorities, both physical and legislative. Perspective of Ukraine to turn into a dictatorship country becomes a reality right before our own eyes.

In his speech Volodymyr Naumenko underlined the importance of contribution of each person to a common cause: "We came on the 19th of January to Mykhailivska Square in Kyiv to express our position, to recall our comrades, our lost ones and to declare: we are ready to stand for the rights of each and everyone and we are ready to apply ourselves to prevent reiteration of the similar tragedies in the future". "To remember means to fight!"

For illustration were used the photos by Irina VIRTOSU, Human Rights Information Center.