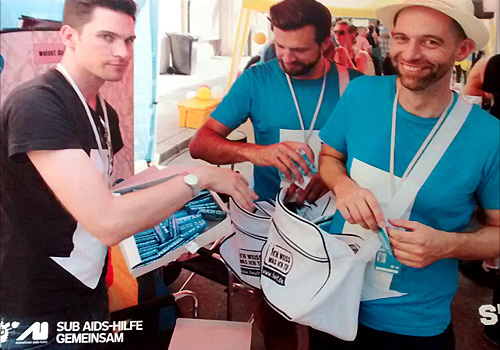 While continuing the story of our volunteers study tour in Munich let us mention that every day of the trip was full of events and various meetings. On Thursday a group of activists met Mr. Andreas Unterforsthuber, the head of information center on LGBT issues at the Municipality of Munich.

The Center implements its activities under two main directions. The first is providing advice to the mayor and the city council on policy making on LGBT-related issues including decent attitude at the workplace. The second is coordinating all the city organizations and groups of interests. For this purpose quarterly roundtables are being conducted, where community representatives have an opportunity to discuss their plans and challenges. In addition, there are meetings dedicated to more specific topics and a separate meeting with the city council representatives. In the framework of coordination operates regular electronic newsletter about all the important and interesting LGBT events of the city.

Another subject to learn about was the work of the parent group. One of organizers of this project, Thomas Fraunholts, told about the experience of his organization and how it works. Parents themselves initially showed interest to create such a group. Once the specialists of the Centre for gays Sub and the Center for Lesbian and Transgender LeTRa received several such appeals, they got together and jointly created the concept of the parent group.

Group members met thanks to advertising, widespread in the press and through the counseling centers. It is quite interesting that the gender composition of the group – approximately 50/50, dad comes as much as mothers. First few months the meetings were conducted under support of the psychologists of the organization, but today the group is ready to become an independent one.

One more important topic Ukrainian activists learnt about was HIV prevention among gay people. For Germany, this work is particularly relevant since MSM make up 70% of all new HIV cases. As in many other areas of public works, most of the functions of the programs implementation here assigned to volunteers. Main activities – preparing and carrying out of street actions, work in night clubs and HIV counseling in bars and cafes. All of this exceptionally voluntary work, paid staff are connected only at the stage of testing and psychological support and in case of a positive HIV test results.

As the positive conclusion of the working day became communication with representatives of sports and tourist club Hike Dykes. Its participants – active and interesting girls – gather together at the club to explore the beautiful areas of Germany and beyond. It could be very short walks around the neighborhood of Munich or major hiking in the Alps or the Pyrenees. Such a club is a great example of self-organization within the creation of groups of interests.