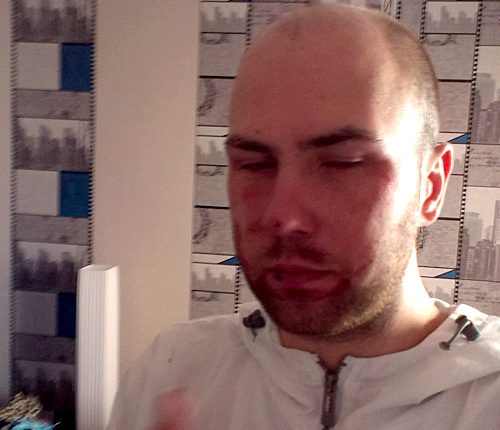 Today, on 27th of March around 6 a.m. an activist of "Gay Alliance Ukraine" Konstantyn Myrny was attacked.

Three unknown persons, dressed in camouflage, waited for him near his house under the porch. The attack resulted in a split lip and a large hematoma under his left eye. Konstantyn was repeatedly beaten by the criminals on his kidneys; one of the strikes hit his nose.

There is no doubt that the attack was targeted, as the attackers for several times cried out the words of homophobia and nationality insults against the victim. We have reasons to believe that the attackers were aware of the approximate time of Konstantyn returning home, as well as of his Crimean registration and personal life.

Attackers broke Myrny's cell phone and stole some money from his wallet. Police arrived at the crime scene only 40 minutes after. The statement of the attack compiled and witnessed in the Darnytsya district police department in Kyiv. All the facts of the attack were accurately reflected in the police protocol except the insults based on sexual orientation: the police refused to register this fact in the document.